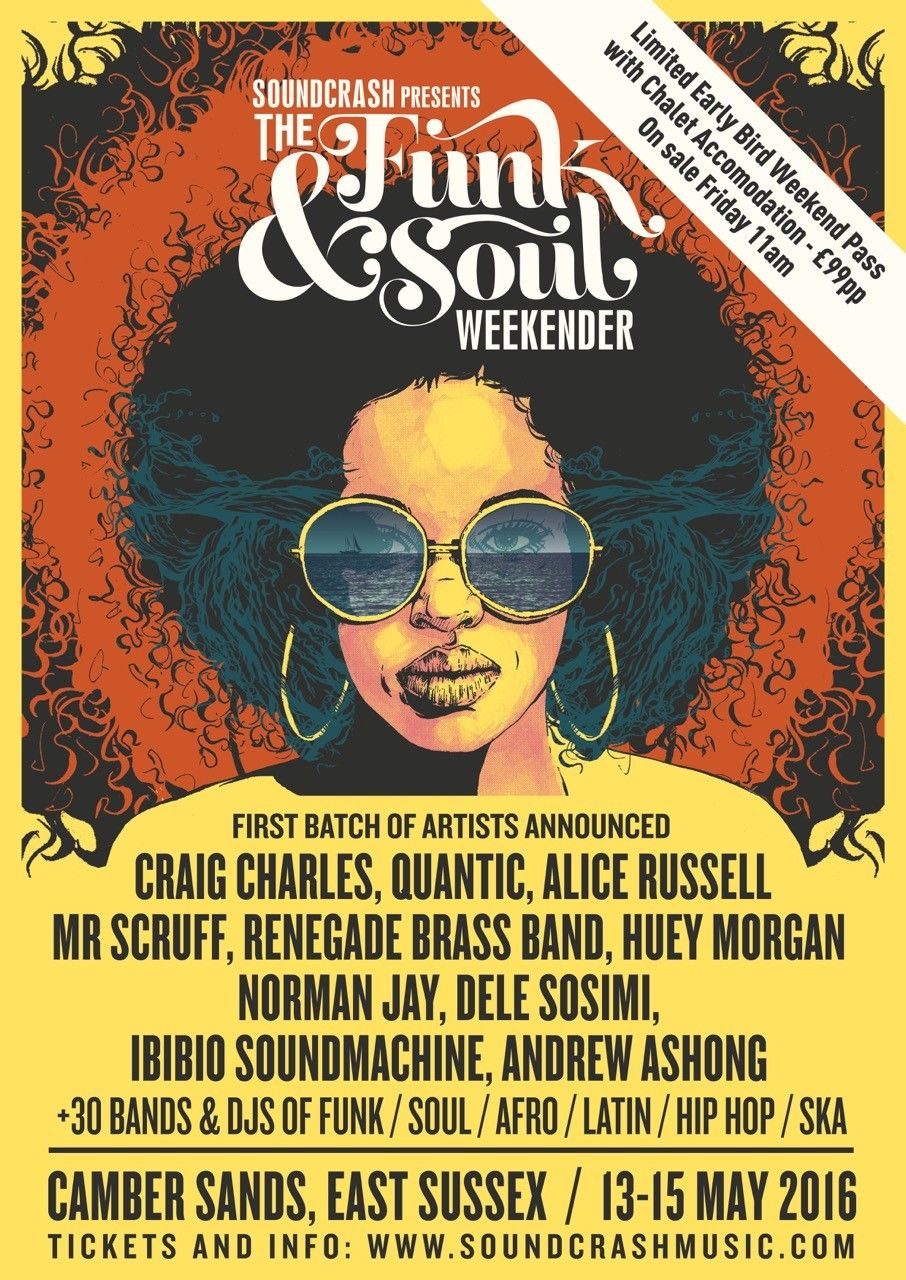 From Funk to Soul, to Latin and Afrobeat to Northern Soul, Ska and Swing a touch of the right Hip Hop & House and everything in between, this new event on the festival calendar is an intimate affair, with a capacity of 3000, created for an audience that truly loves its music.

The impressive line up includes respected and celebrated names including; Fun Lovin’ Criminals frontman Huey Morgan; British soul singer Alice Russell; and carnival legend Norman Jay. This is a key weekend on the 2016 calendar for any discerning music lover.

Soundcrash’s Rob Waller explains the event is in response to a renewed  public interest in the genres, with record numbers of fans attending shows for established legends such as George Clinton, Quantic, Tony Allen and Tinariwen. There’s also strong and growing interest in a very vibrant new soul scene with artists such as Taylor McFerrin, Andrew Ashong, Haitus Kaiyote and Andreya Triana at the helm.

“Soul, funk, jazz, afrobeat and latin has all been at the heart of my booking for almost 2 decades; and although Soundcrash Productions – itself in it’s 10th year, is equally well known for it’s innovative electronic, bass music and hip hop output (which crosses very well into these genres), I thought is was time to make a special event specifically within the world of funk and soul for 2016.” – Rob Waller, Programmer and Founding Director, Soundcrash

Soundcrash has also announced some fun and unique experiences as part of the event, including Live Band Karaoke, DJs, Brass Bands, Music Quizzes, Northern Soul Dance Classes, South London Soul Train Stage, and Live Brass Band Soundtracked Crazy Golf Tournaments. Warming up for the festival, associated club nights and DJ’s from the country’s finest Soul nights, including Move On Up and Soul 45, will be promoting parties in the lead up to the big event.

This is set in the picturesque Camber Sands holiday camp in East Sussex, a mere hour’s train journey from London. Chalet accommodation (catering for 4-6 people) is included in the price of festival tickets and early birds are now on offer at £99pp.

Get your dancing shoes packed and we hope to see you in Camber!