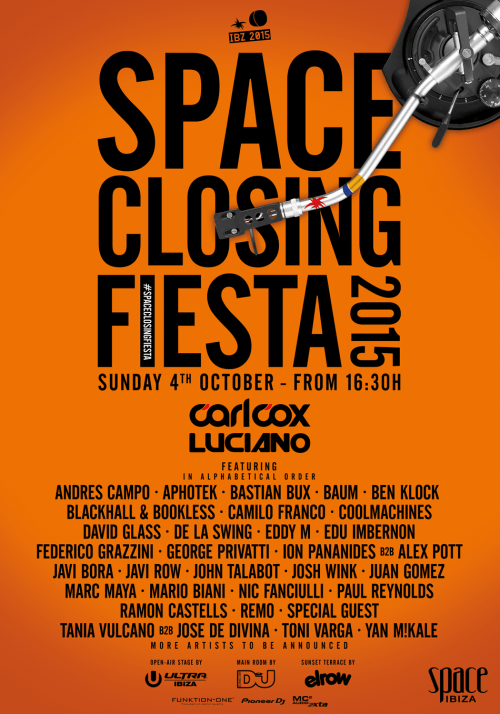 On Sunday 4th of October, a party will take place at Space Ibiza to celebrate the end of a season full of unforgettable nights, laughter, music, dancing and good times.

Starting at 16.30h and carrying on for more than 17 hours, the Playa d’en Bossa club will welcome thousands of people among its 6 rooms to offer the best farewell to a summer of success. The first advance of artists that will play Space Closing Fiesta are as follows:

More names will be added to the list in the coming days. To make the wait shorter, we reveal some of the key moments of this long-awaited day:

– The king of techno Carl Cox will play on the outdoor stage Ultra Ibiza and to top off this great season, he’ll also close the party with a B2B session with Nic Fanciulli in the Terrace.

– Luciano will also make a double appearance. First in the UMF Ibiza stage and later in the Main Room accompanied by Josh Wink for what promises to be an unforgettable back to back set.

– Flight Area – Ultra Ibiza. The parking area of Space Ibiza will become, as in every Opening and Closing an outdoor area that can accommodate thousands of people, with a stage containing a spectacular sound system and unbelievable production. All under the support of one of the most successful electronic music festivals in the world: Ultra Music Festival.

– Main Room – DJMag: the number one electronic music magazine will be responsible for Space Ibiza’s Main Room so the atmosphere is guaranteed to be electric!

– elrow at the Sunset Terrace: Viladecans party will bring a touch of colour and madness with its huge production.

– In addition to the artists who remain to be confirmed, we will have a special guest to be announced the day before the event.

Stay tuned! Soon we will reveal more names and news for the Space Closing Fiesta 2015. Tickets are available on Space Ibiza’s website.