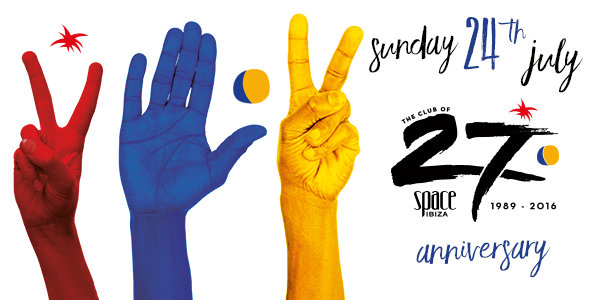 After 2016 Ibizan clubbing will never be the same again. Come celebrate with us and be part of clubbing history!
24th July
Space 27th Anniversary

27 is an important age, it is when a handful of ultra talented and beautiful artists came to a premature and striking end – like Kurt Cobain, Amy Winehouse and Jimi Hendrix, Space Ibiza now joins the famous 27 Club. It exits the scene that it has helped to build, looking amazing, full of energy and at the top of its game in the world.

It all began with club visionary Pepe Rosello who first launched the club in 1989, this was during the second ‘Summer Of Love’, the year that Ibiza as we know it was being born, and the year that dance music took hold of youth culture across the world. Since then the club has grown, has changed many times and countless legendary club moments have been lived.  Pepe ultimately cultivated and crafted one of the world’s most respected and revered venues universally loved by clubbers and DJs alike.

Now this summer will be your final chance to say ‘you were there’, that you danced on the legendary terrace and were blown away with the sheer atmosphere of the main room. What better place to do this but at its 27th and final anniversary on July 24th 2016.

Lest we forget, it was here that clubbers first famously cheered every arriving aircraft that used to roar above their heads on the famous terrace, this was to become Space Ibiza’s defining feature for many years until the terrace was ultimately covered over.

It still stands as the world’s most awarded club to date and is known for its unrivalled atmosphere, sound and spectacular production. Few can contest that the sound system is one of the most sonically perfect in the world. Over the years the venue has showcased and introduced the scene’s best known and respected techno and house DJs and this seasons line up is one of the strongest in its 27-year history.

At the anniversary you will find an unrivalled and varied line up that willl be announced shortly  This is your last chance to get involved and share in a historic moment of clubbing culture.