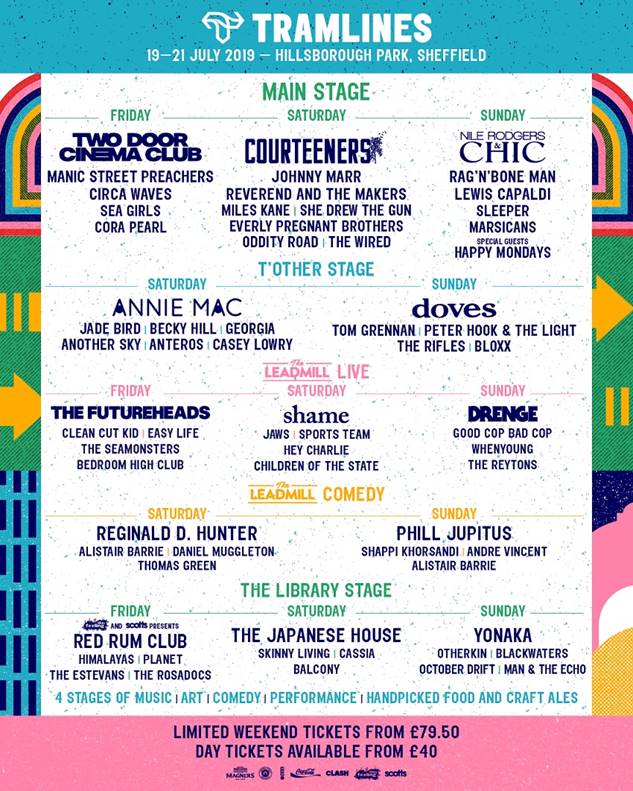 Tramlines, one of the UK’s most popular city-based festivals, has revealed the day splits and stages for its 2019 event that will take place from 19th – 21st July 2019 at Hillsborough Park in Sheffield. Alongside this announcement and following an unprecedented demand, Tramlines have also released a limited number of day tickets priced at £40 for Friday and Sunday and £45 for Saturday, both plus booking fees and available from www.tramlines.org.uk. With its biggest lineup to date including Two Door Cinema Club, Courteeners, Nile Rodgers & CHIC, Manic Street Preachers, Johnny Marr, Rag ‘N’ Bone Man, Annie Mac and Doves, plus the recently revealed comedy line-up headlined by Phil Jupitus and Reginald D Hunter, the 11th edition of Tramlines is set once again to stage Sheffield’s biggest ever party.

The Friday at Tramlines will kickstart a jam-packed weekend of incredible music. The Main Stage features a headline performance from Two Door Cinema Club with Manic Street Preachers, Circa Waves and more warming up crowds beforehand, whilst over atThe Leadmill Live tent, The Futureheads step into the top spot with plenty more talent including Clean Cut Kid, Easy Life and The Seamonsters. The Library Stage presented by This Feeling and Scott, opens with a breaking talent bill confirmed as Red Rum Cub, Himalayas, Planet and tons more.

With the party in full swing, the Saturday at Tramlines ramps up the proceedings several notches with all four stages of music throbbing at full capacity. The Main Stage sees festival highlight performances from Courteeners, Johnny Marr and Reverend and The Makers; T’Other Stage (Stage 20) hosts sets from Annie Mac, Jade Bird, Becky Hill and more; Shame, JAWS and Sports Team amongst others will get crowds jumping over at The Leadmill Live, whilst during the day on The Leadmill Comedy bill,Reginald D Hunter, Alistair Barrie and more comics deliver some of the best stand up seen yet at Tramlines. The Library Stage on Saturday continues to showcase new talent with a schedule including The Japanese House, Skinny Living, Cassia plus further breaking bands.

The atmosphere on Sunday at Tramlines is always a special one and the 2019 event will be no different. The splits have been announced as, playing the Main Stage, Nile Rodgers & CHIC, Rag ‘N’ Bone Man, Lewis Capaldi and more; T’Other Stagefeatures Doves, Tom Grennan, Peter Hook and The Light plus others; Drenge, Good Cop Bad Cop, When Young step onto The Leadmill Live stage after comedy heavyweights Phil Jupitus and Shappi Khorsandi have given crowds the giggles for The Leadmill Comedy on Sunday day time. The Library Stage will continue to rock with sets from Yonaka, Otherkin, BlackWaters and many more.

For full details on the stage splits for Tramlines Festival 2019, guests should visit the official website at www.tramlines.org.uk.

Whilst the Tramlines line up gets bigger each year, it remains seriously good value for money. A very limited number of day ticketscan now be purchased from £40 +bf. Tickets have sold quicker than ever in 2019 but an extremely limited quantity of final tier weekend tickets priced at £79.50+bf are still available for purchase. The option remains to split this cost over 2 months using the payment plan. VIP upgrade tickets are available for an additional £50 granting access to the private VIP area situated right next to the main stage with private bars, food stalls and toilets. Under 12s go for free. For full ticketing info including monthly payment plans, visitwww.tramlines.org.uk.