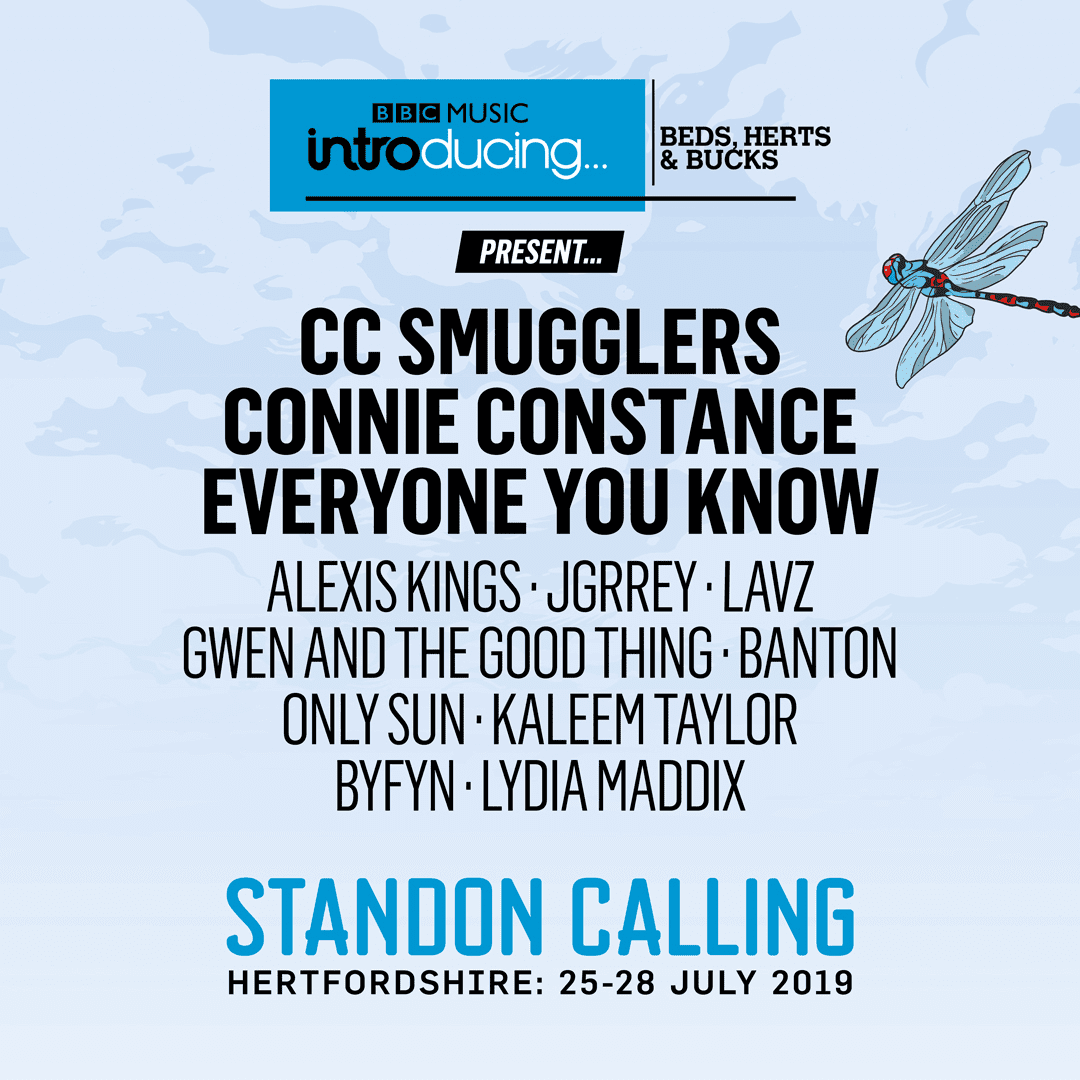 Boasting world-class headliners and true game-changing favourites, Standon Calling revels in being a festival that plays host to some of the biggest and most exciting new artists on the planet before anyone else – particularly shining a light on the blossoming local scene around the festival in Beds, Herts and Bucks. Teaming up with BBC Introducing In Beds, Herts And Bucks after memorable years that have seen true standout performances, a range of new names have been announced today for a stage packed with fresh new talent on the cusp of great things to come.

They’re lead by the richly tipped Everyone You Know whose modern genre-hopping styling has made them one of the most unique new artists of 2019 so far. Melding dance, hip-hop, indie sensibilities and an unmistakable knack for soundtracking modern Britain, their headline slot on the BBC Introducing stage will be an unmissable glimpse into the future. They’ll be joined as headliners across the weekend by a true BBC Intro favourite Connie Constance, whose debut album ‘English Rose’ arrived just over a month ago to vast critical acclaim for its insatiable jazz-infused independence – along with the Americana swings of CC Smugglers playing what’s sure to be a joyful highlight of the weekend with debut album ‘How High’ already storming charts to vast acclaim.

Speaking about their huge slot on the BBC Introducing In Beds, Herts & Bucks Stage, CC Smugglers said:
“BBC Introducing have supported our music since we first started, to be able to headline/bring our touring show to the BBC Introducing Stage at Standon Calling is a fantastic opportunity! After a tense year of falling foul of the PledgeMusic fiasco and losing a large amount of crowdfunded money and then cancelling our UK tour due to a serious family bereavement, Standon Calling represents a positive start back on the road for us and we really can’t wait to get our hands dirty!”

Also set to join the bill across the weekend is the soulful, dream-vibes of JGrrey whose breakthrough COLORS session remains a must-watch and is sure to come to life live at Standon Calling this year. From the swinging indie charm of Alexis Kings and the infectious guitar swoons of Only Sun to shining pop movers Gwen And The Good Thing, Banton, BYFYN and Lydia Maddix– Standon Calling sits as the first place to catch the acts making a wave across the Three Counties and beyond.

Already thriving with a jam-packed array of unmissable entertainment, Standon Calling is primed to be a defining festival weekend of the summer – kicking off in style with a phenomenal Thursday night programme ready to get the party spirits moving.

It simply can’t be Standon Calling without Uncle Funk And The Boogie Wonderband. The titans of Thursday night partying are back to kick-start the weekend in all their disco-styled glamour and glory. They’ll be joined by festival favourites Baron Goodlove & The Dreadful Noise, rising Newquay trio William The Conqueror and the bouncing sweet sounds of Club De FromageDJing the night away to close Thursday night in a blaze of glory. With Day Ticket Holders able to upgrade their tickets to the full Weekend experience with only the difference between tickets to pay, there’s no reason to miss out on one single second at Standon Calling this year.

Uncle Funk And The Boogie Wonderband commented on their return to Standon Calling, saying:
“Uncle Funk & The Boogie Wonderband are stoked to be coming back to open Standon Calling on the Thursday night! Last year’s performance was our favourite show last year (and that’s saying something – we played over 130 shows in 2018!), so we’re really looking forward to getting the amazing Standon crowd riled up with some kicking disco classics!”

Returning between July 25th-28th 2019, Standon Calling stands above the rest as a true gem of the UK festival summer. From live music greatness to late-night electronic frolics, the family programme joins a phenomenal bill spread across the grounds of Standon Lordship, boasting an eclectic mix of international superstars, talked-about favourites and rising new talent. Headlined by the iconic Nile Rodgers & CHIC, the Mercury-Prize winning Wolf Alice and pop supremo Rag’n’Bone Man – the likes of returning local titans and Special Guests Friendly Fires, Echo & The Bunnymen, Róisín Murphy, IDLES, Lewis Capaldi, Mahalia, Kate Nash, The Big Moon, Steam Down, The Japanese House, Band Of Skulls, The Go! Team, The Joy Formidable, Sea Girls, Erol Alkan, Simian Mobile Disco, Warmduscher and many more are all set for remarkable moments across the July weekender. With late-night takeovers and euphoric dance moments from Hospitality, Crazy P Soundsystem and more alongside a stellar variety of unique activities and a laugh out loud comedy bill including Russell Kane, Angela Barnes and Abandoman – Standon Calling 2019 is packed from top to bottom with something for everyone.

Tier 4 tickets are now on sale for Standon Calling 2019 – with previous tiers selling out in record time. For further details, head to http://www.standon-calling.com/tickets