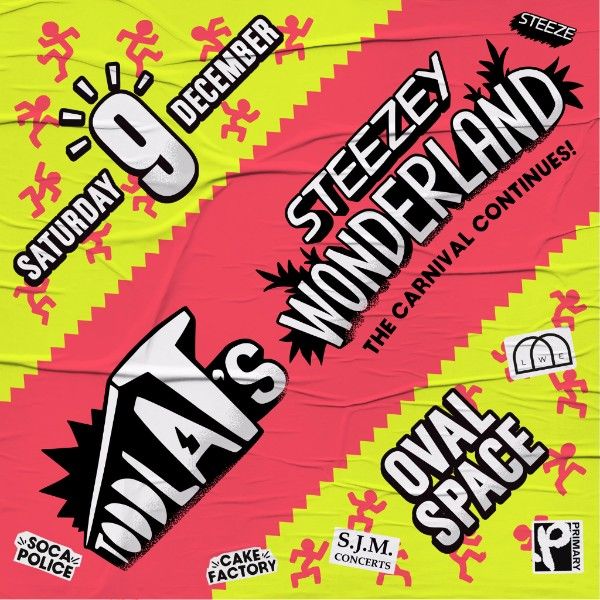 Summer may be over, but the carnival continues!

On Saturday 9th December Toddla T & his Special Guests take over Oval Space for Steezey Wonderland! The skies are grey, the wind cuts right through you and the car needs defrosting in the morning – winter in the UK can be bleak. Steezey Wonderland is an injection of heat and colour at a time of year we need it most. While everybody else is getting festive and wrapping-up warm, we’re all about sound system vibes and culture, and you can expect the full spectrum of dancehall, reggae, house, garage & grime.

The line up has just been announced and in keeping with previous years it’s pure heat. Toddla is joined by trio DJ Spoony, Mikee B & Timmi Magic – The Dreem Teem, Jus Now x Dismantle, P Montana + Afro B, Jamz Supernova + Stush, and Snoochie Shy. Plus dance troupe Cake Factory will be in the building and security supplied by The Soca Police, don’t wine too fast.

Always full of surprises, last year Toddla treated us to a surprise special guest performance from the don Sean Paul, so it’s fair to expect the unexpected.

Previous guests at Toddla parties include big hitters like: JME, Mike Skinner, Annie Mac , Fuse ODG & Jorja Smith. There’s been a mix of top selectas and MCs including The Heatwave, Wookie, Roll Deep, Roll Deep, Rampage and many many more.

As well as Toddla’s unique carnival atmosphere renowned for the astronomical vibes, listen to an eclectic line-up bringing the best of dancehall, garage, grime, bass, reggae and all things sound system led.