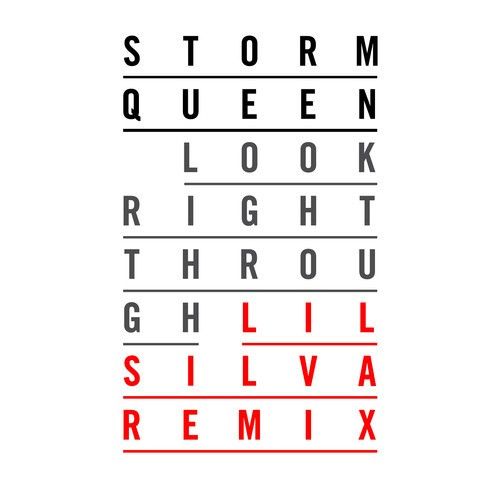 Hold tight for one of the biggest records of 2013… The new MK vocal edit of Storm Queen’s ‘Look Right Through’ will be released later this year on Ministry of Sound/Defected. Joining the party is UK bass don, Lil Silva, who’s delivered a signature bass heavy remix.

Storm Queen’s ‘Look Right Through’ first surfaced on Defected in 2012, and MK’s Dub III quickly became an underground hit via Beatport and an astonishing array of DJ supporters. To date, MK’s Dub III has become THE YouTube deep house anthem, with over 2 million combined views, hit the Top 10 Shazam pre-release chart (No. 1 in Top 20 pre release and No.10 on the main Top 200 chart) and so far received repeat plays from Radio 1’s Pete Tong, Annie Mac, Zane Lowe, Danny Howard, MistaJam and many more, with widespread support from 1Xtra, Kiss, Capital, Juice (ROTW) and beyond.

‘Look Right Through’ (MK Remix) is currently one of the biggest tracks of this summer’s dance festivals, now with a full vocal, which Pete Tong premiered on Radio 1, it’s destined to light up the oncoming winter charts.

The track is the work of Storm Queen aka American DJ/producer, Morgan Geist and former ‘subway singer’, Damon C Scott. Geist is also known as one half of celebrated US house duo, Metro Area. A cult figure with the global electronic music movement, his output has covered disco, house and boogie, with each release displaying a clear affinity with the dancefloor.

MK aka Marc Kinchen has returned to the forefront of dance music this past year, twenty years after his era defining hit with the Nightcrawlers. He’s been one of this season’s ‘must-sees’ in Ibiza.

‘Look Right Through’ is a joint release between Ministry of Sound and Defected Records, who hold their flagship Defected In The House events at the world-renowned club.