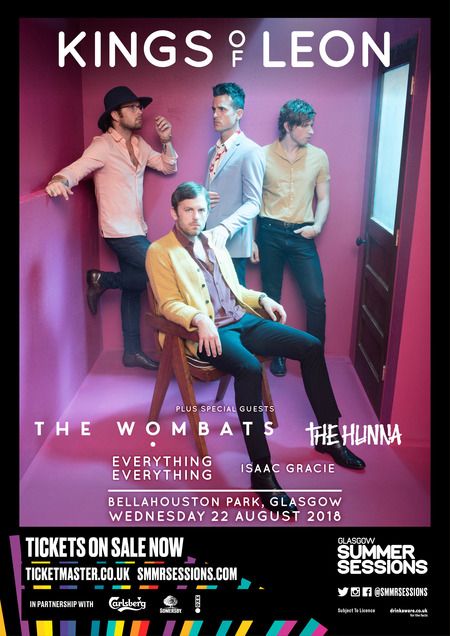 The Hunna, Everything Everything and Isaac Gracie will join Kings of Leon and The Wombats at Glasgow Summer Sessions on 22nd August 2018.

Following the release of their hugely successful debut album in the summer of 2016, The Hunna have established themselves as one of the UK’s most in-demand bands. Having experienced a rapid rise that saw the band land at #13 in the album charts 10 months into their career, The Hunna are sure to bring an enormous energy to their set at Glasgow Summer Sessions this summer. From selling out two back-to-back album tours that included London’s Kentish Town Forum and Shepherd’s Bush Empire, the band also headlined memorable nights nationwide at venues such as Glasgow’s Barrowlands, Manchester’s Academy 1 and Nottingham’s Rock City. 2017 has also seen The Hunnaheadline Camden's prestigious Roundhouse as well as a pioneering moment topping the Festival Republic Stages billings at this year’s Reading and Leeds Festival.

Having previously been referred to as ‘Rock’s Next Big Thing’ by Kerrang Magazine, singles such as ‘Bonfire’ and ‘You & Me’ have helped to earn over 45 million streams across The Hunna’s Spotify catalogue. The band have been championed by BBC Radio 1 with ‘Never Enough’ reaching B-list and gaining support from the likes of Huw Stephens, Clara Amfo and Greg James.

Everything Everything will return to Scotland this summer at Glasgow Summer Sessions, following a momentous sold out show at Glasgow’s Barrowlands earlier this year. The infectious gig followed the release of a brand new EP of fresh material, A Deeper Sea. Everything Everything are well equipped to match the energy of the legendary Scottish audience as their sublime set on the Main Stage at the inaugural TRNSMT Festival was a truly explosive highlight of the weekend in Glasgow Green. The latest release is the first new material from the four piece since their brilliant fourth album A Fever Dream. A critical and commercial success, the astounding album hit the Top 5 on its release, the joint highest charting album of their career to date. This brand new music comes as the band gear up for some of their biggest shows yet and DF Concerts cannot wait to welcome them back to Scotland at Glasgow Summer Sessions on 22nd August 2018.

A self-taught musician and truly one of a kind, Isaac Gracie is not to be missed at Glasgow Summer Sessions in 2018. The former choirboy turned up-and-coming musical prodigy released his much-anticipated debut album in April of 2018, and has turned industry heavyweights such as Zane Lowe and Jay-Z into fans and champions of his music. For an artist only at the very beginning of their career, Isaac Gracie has all the components for a rockstar in the making and is an endlessly inventive songwriter. The singer’s star looks to be on the ascent and is therefore a must-see at this year’s Glasgow Summer Sessions.