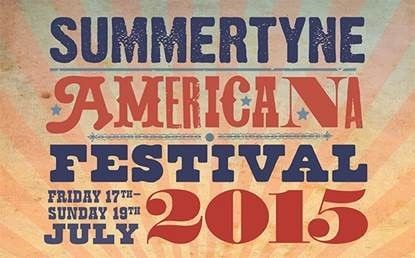 SummerTyne Americana Festival is TEN!  To celebrate the tenth birthday, festival  organisers are delighted to announce that they are staging a weekend long party and inviting some of their most famous and legendary friends along, as well as the pick of the new crop of breakthrough acts.   This jam-packed weekend brings the finest American roots music, from both sides of the Atlantic and this year’s festival presents a strong seam of southern soul, blues and gospel alongside a sensational cast of country, rock and Americana stars. Headliners taking to the stages at Sage Gateshead between 17 and 19 July will be:

When it comes to country music royalty Emmylou Harris is one of the first names to roll off the tongue and in a breathtakingly brilliant partnership with long time collaborator and friend Rodney Crowell, SummerTyne kicks off in the presence of greatness!

From the first family of American music, Rosanne Cash & John Levanthal return to SummerTyne for an intimate duo show,  performing material from Cash’s remarkable and glorious GRAMMY winning album ‘The River & The Thread’.

Young British country act The Shires well and truly broke through in 2014 with debut album ‘Brave’ storming into the top ten in the UK charts on the tidal wave of popularity for country music in the UK.  Sharing the bill will be Nashville country star and song-writing ace Jace Everett, who’s song ‘Bad Things’ is the sultry theme for the HBO series True Blood.

Festival organisers are thrilled that the 2015 programme also includes an incredibly rare opportunity to see, from Muscle Shoals, Alabama, legendary duo Dan Penn & Spooner Oldham perform songs from their remarkable back catalogue.  Two of the most important song-writers to emerge from the deep south during the boom of 60’s soul music, they composed soul classics including ‘I’m Your Puppet’ and ‘Cry Like a Baby’.  Penn (with Chips Moman) wrote the defining Aretha Franklin track ‘Do Right Woman’ and the classic ‘Dark End of The Street’ and Oldham’s distinctive keyboard sound was key to seminal recordings including ‘When a Man Loves a Woman’ and ‘Mustang Sally’.

In keeping with the Southern theme, Gospel as well as Soul music plays a big part of SummerTyne 2015 with appearances by standout female vocalists, Alabama born Naomi Shelton and The Gospel Queens and Nashville’s legendary McCrary Sisters between them delivering a triumphant combination of close-harmony vocals, funk, blues, soul and foot-stomping R&B. Alongside the McCrary’s we are delighted to present grandson of the legendary R.L Burnside, award winning drummer Cedric Burnside, whose music infuses Mississippi Hill County Blues, funk, R&B and soul that will keep your foot stomping all night long.

If alt-rock and Americana is more your thang, we are delighted to welcome Super Furry Animals’ front man Gruff Rhys to SummerTyne with his concept travelogue ‘American Interior’ which is a master class in song writing and storytelling with film and live music, conveying a quest of continental proportions. Also New York’s Felice Brothers with their inimitable brand of rustic American folk cooked up with a rock & roll flavour.

Sponsored by DFDS Seaways, the outdoor stage is hugely popular with audiences and artists alike.  Max Foster, passenger services director at DFDS Seaways comments; “Live music and entertainment is an important part of our Newcastle-Amsterdam cruise ferry service and we are very happy to be able to support this vibrant and popular festival on Gateshead Quays.”

All events take place in or around Sage Gateshead and there is much more to keep festival goers entertained at the tenth SummerTyne Americana Festival with musical river cruises, film programme, talks, a record fair, street food, themed fun family activities and family concerts and join in and sing choirs.  More artists will also be announced very soon.

Tickets on sale from 10am on Wednesday 1 April with Early Bird/Festival Passes available.  For tickets and details of the full line-up go to www.summertyne.com or contact Sage Gateshead Ticket Office on 0191 443 4661.  So iron your best frock or don your pearl snap shirt and join us by the river for some SummerTyne fun!