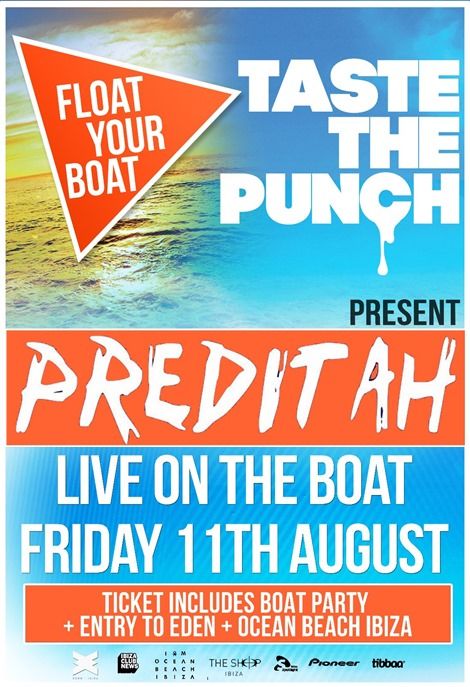 Taste The Punch continue to make waves in its Ibiza debut, this time by hosting a special sunset cruise in partnership with Float Your Boat, featuring a special guest performance from Grime artist, Preditah. This intimate event for just 200 people on Friday 11th August is the perfect warmup for Preditah’s set on the Taste The Punch main dancefloor at Eden later that night, where in a grime and garage takeover, he’ll appear alongside heavyweights Mike Skinner & Murkage present Tonga and DJ Target…

Taste The Punch is thrilled to announce a one-off sunset boat party from the San Antonio Harbour on Friday 11th August with leading grime producer, Preditah. In association with respected boat party organisers, Float Your Boat, this exclusive event for just 200 clubbers, will cruise the crystal clear waters of the Med as it takes in Ibiza’s iconic sunset, in the perfect warmup for Preditah taking over the Taste The Punch turntables at Eden Ibiza, that same night. The evening event marks the first of two grime takeovers staged by Taste The Punch as part of its Eden residency. Alongside Preditah, TTP welcomes The Streets’ frontman Mike Skinner and Murkage Dave with their ‘Tonga’ brand, and BBC Radio 1 Xtra’s, DJ Target. Limited tickets for the Taste The Punch boat party are now on sale from €40.00 viahttps://tibbaa.com/order/rnz3xr6fj1

Since 2013, Taste The Punch has been throwing the hottest underground parties in Luton with such luminaries as Pete Tong, Claptone, and Darius Syrossian to name only a few.  In its first venture outside of the UK, Taste The Punch launched its debut Ibiza residency at Eden earlier this year, for a summer-long party of quality and diverse electronic bookings. To ‘the punchbowl’ so far it has welcomed Felix Da Housecat, Tough Love and Mar Knight, whilst future appearances from DJ Sneak, Faithless (DJ Set) and Giggs and others are just around the corner. Continuing to expand its horizons once again, Taste The Punch will dip its proverbial toe in the ocean as it becomes part of the Ibiza boat party crew.

Sailing from the nearby Ibiza Rocks Bar at the San Antonio Harbour at 4pm on 11th August, Taste The Punch will host a 3-hour sunset cruise filled with the best in grime and garage from, Preditah. The Brummie DJ / producer, renowned for pioneering sounds of the scene on his KISS Fresh show, is in demand, as ever. He has recently compiled the latest in the Fabric Live series, released ‘Blank Canvas’ as the debut single on his new label, Circles, and has appeared on dozens of festival and club stages including Fabric, Parklife, and Altn8. Preditah is a key booking for Taste The Punch this season – fans attending either the boat party or the main Taste The Punch event at Eden, will not be disappointed.

From midnight at Eden, Preditah will appear alongside Brit Award winner Mike Skinner and Murkage, aka Murkage Dave, founder of Manchester’s Murkage Cartel. Together they present ‘Tonga’, the rap, grime and dubstep night ran by the pair, so expect a soundtrack perfectly encapsulating the vibe of the infamous Tonga night, which has featured surprise guest appearances from Kano, Giggs, and Big Narstie.

Also featuring at Taste The Punch at Eden is London-born, DJ Target. In addition to his Radio 1-Xtra show, Target is best known as part of one of the UK's best-selling urban acts, Roll Deep. The collective’s debut album, In At The Deep End, has to date, sold over 95000 copies in the UK alone. He also has a string of high profile collaborations to his name including Dizzee Rascal, Wiley and Boy Better Know. Expect DJ Target to stir up the punchbowl with some killer tunes at Taste The Punch!

Tickets for the Taste The Punch boat party are now on sale for €40.00 for boat only, or with additional entry to Taste The Punch at Eden and with entry to Ocean Beach the following day, for €60.00. Visit https://tibbaa.com/order/rnz3xr6fj1 for ticket options.

If you’re looking for something special and memorable in Ibiza this summer, look no further than Taste The Punch.