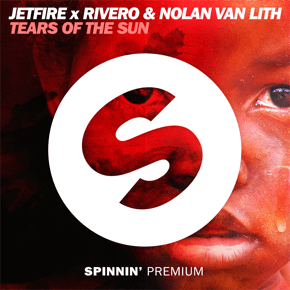 It's a dream team entering Spinnin' Premium, as renowned artists JETFIRE, RIVERO and Nolan van Lith work up the invigorating tune 'Tears Of The Sun'. As with every Premium release, the track will be available as a free download for the next two weeks:

For sure, here's a group of much acclaimed artists working at the top of their game. Israeli-Belgian act JETFIRE has already made impressions worldwide with its releases on Spinnin' Records, Musical Freedom, DOORN, Ultra and Mainstage, while conquering stages everywhere with its energetic performances.

The same goes for RIVERO, the rising young star from Israel who's already seen his records get supported by all the greats out there. Still a teenager, he's already released his music on labels like Spinnin' Records, Oxygen and Revealed, and counts as one of the upcoming new heroes of the world's mainstages – which was underlined when he recently teamed up with JETFIRE and Lil Jon for the widely support hit tune 'VEGAS'.

Speaking of solid support, Nolan van Lith has enjoyed the same amount of enthused DJ feedback. As we speak, the young US artist is making his way towards the bigger stages, gaining momentum with every release.

'Tears Of The Sun'
Which counts especially for this new cut the trio delivers here. 'Tears Of The Sun' is an ultimate festival crowdpleaser, featuring melodic chords and intense drop, highlighting each of the artists' talents.

JETFIRE quote:
"Nolan and RIVERO started working on this track and came with the amazing drop idea.
I immediately wanted the track to sound like a journey into the great continent of Africa, so started combining tropical tribal sounds with a crazy energetic drop. The name of the track was taken from the movie 'TEARS OF THE SUN', that speaks about the wars in Africa and how innocent people's lifes are affected as a result from that. We think that music should carry a massage even when people are dancing to it."

Spinnin' Premium
Spinnin' Premium was launched in October 2015 as a new sublabel of Spinnin' Records, solely focusing on 100% free downloadable tracks. This is based on a (free) subscription; after signing up on the Spinnin' Premium website, every release can be downloaded for two weeks. By now, many artists have released their music here, including Quintino, Firebeatz & Apster, Watermät, Julian Jordan, Chocolate Puma, Mightyfools, Redondo, Lucky Charmes, Curbi, Tavi Castro and many more.