Drummer B - The Diamond Project EP1 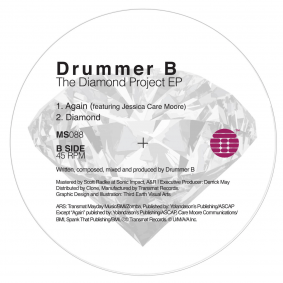 Drummer B - The Diamond Project EP1

Described by Cornelius Harris of Underground Resistance as “Standing on the corner of techno and hip-hop,” Drummer B is the sort of producer who could only come from Detroit. Sharing credit with Detroit’s hip-hop heavies that include Danny Brown and Proof from D12, the producer born Leonard Ware stepped out on his own with the self-released 2016 albumSpace Bounce and continues his musical journey with the first of two releases on Derrick May’s Transmat label, The Diamond Project EP 1.

The nephew of Detroit jazz great Allen Barnes, Leonard Ward has lived his whole life in the city that inspires his sound. And the city leaves its mark all across these four tracks, each with a distinct style that Motown music enthusiasts will find familiar yet exhilarating. “In Case Y’all Forgot” starts with a skeletal 909 electro bounce that bolsters a spectral array of municipal boosterism samples (a distinct characteristic of Detroit music) that puffs out its chest until an unexpected spin on James Brown’s classic “Think (About It)” sample (i.e. – “Woot! Yeah!”) reminds you that there ain’t no party like a Detroit party.

“What Dat Jxxy Bout” takes trap musical trappings and supercharges them with ghetto-tech bounce—the hyperactive synth bass grinding up on rapid fire snaps and snares with a lyrical cadence that is appropriately obscene. “Again” shows the other side of Detroit soul with an extended spoken word performance by Jessica Care Moore that takes a prideful stance on the challenges of urban existence, including a poignant moment to reflect on the experience of loved ones left behind while Detroit musicians conquer the globe. Last is, “Diamond,” a half tempo joint (or double time, depending on how you juke), that gradually glitches with precision programming that only the most discerning beat head would catch.

Thick with MPC funk and Motor City street smarts, Drummer B injects an urban attitude into Transmat’s techno lore while maintaining the only thing that truly matters when it comes to Detroit music—a sense of adventure and a hefty helping of pride.