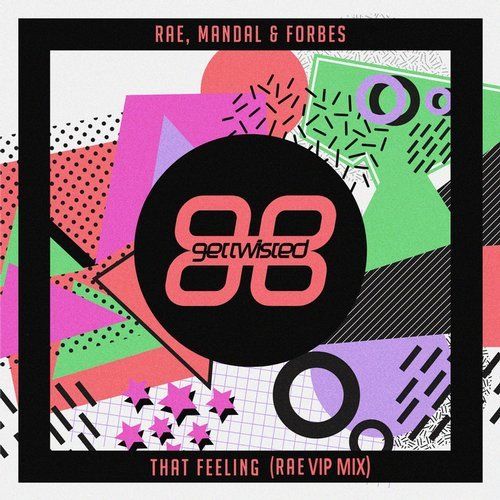 Rae takes things deeper with the VIP Mix of her massive collaboration with Mandal & Forbes, ‘That Feeling’, released on Get Twisted Records on 17 February.

When the original cut was released in December, it immediately made a huge impact on dance-floors and went Top 20 in the Beatport House charts.

Rae’s VIP Mix strips back the piano house of the original, making it darker and sexier for the peak time dance-floor, but still featuring Rae’s powerful vocals and sharp production.

Rae is one of the few artists in the industry who combines a successful career as singer songwriter, DJ, remixer and producer. From her first release ‘Can’t Stop’ with Kings of Tomorrow, Rae has gone on to drive a quality house agenda, with confident productions such as ‘Hide U’ with Sandy Rivera, ‘Another Day’, ‘Deep In Your Love’ and the massive Top 20 release ‘Take Me Away’ with DJ S.K.T.

This year, Rae kicked off with ‘Groove On’ alongside Siege and a fresh collaboration with fellow UK producer Kokiri and drum and bass legend Adam F for ‘Harmony’ on Danny Howard’s new label, Nothing Else Matters.

Rae's live sets are built on emotive performance, smartly positioned soulful, improv vocals over A-grade tech DJing. Whilst building her fan base worldwide, Rae has held residencies at Pacha Ibiza, Ushuaia and Lio, and clocked up prominent spots at festivals and huge dance events, like iTunes, Lakedance, Pacha, Sunburn, ADE and WMC, plus regular sets on home turf at Egg club and Ministry of Sound and global tours with Defected and Pacha.

Mandal & Forbes are fast becoming one of the hottest UK duos in house music. The duo have played together for 10 years and have held residencies worldwide including Ibiza, Marbella and Dubai, with their own yearly sell-out event, ‘Sin Sundays’, hosted in Ibiza’s famous Ocean Club.

Their debut release was ‘Never Let Go’ – an updated & re-sung version of Tina Moore’s 1995 hit ‘Never Gunna Let You Go’. ‘Never Let Go’ was then signed up by Armin Van Burren’s Armada records and had a full release in 2015.

Mandal & Forbes remixed Philip George’s No.1 track, ‘Wish You Were Mine’. The remix reached No.1 on the billboard charts and No.4 on the Shazam house charts. Other remixes include Lost Frequencies ‘Are You With Me’, Low Steppa’s ‘So Real’, David Zowie’s ‘House Every Weekend’, Michael Mandal’s ‘I Don’t Know’, and Clean Bandit ‘Real Love’. Earlier this year, they remixed AS I AM’s ‘All Away’, released on Get Twisted Records.

Get Twisted Records has gone from strength to strength, having signed an imprint deal with Columbia Records in 2015. Owned by the acclaimed London-based duo Tough Love’s Alex and Stef, Get Twisted’s unique sound of bass infused house cuts mixed with R&B, 90s dance and garage has made the label a force to be reckoned with.