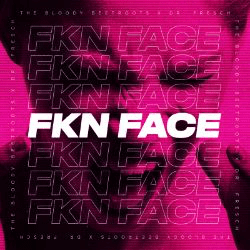 Fronted with a pounding bassline with swirling electronics distinct to the Italian producer’s sound and Fresch’s rushing and distorted sonics. ‘Fkn Face’ hits like an adrenaline rush and sees the producers first collaboration together as an unstoppable anthem.

Marked as the second single from forthcoming EP Heavy, ‘Fkn Face’ follows Sir Bob Cornelius Rifo’s first EP single and collaboration with bass house producer Ephwurd, named ‘Wildchild’. The EP arrives as the first release since 2017’s The Great Electronic Swindle and his first record since a limited vinyl run was released to mark the ten-year anniversary of game-changing EP Warp. Originally released in 2009 in collaboration with Steve Aoki, Warp has since went down as perhaps the definitive record from the late-2000s electro era, with Vice placing the track ‘Warp 1.9’ at #19 on their list of ‘The 101 Best EDM Songs of All Time’.

In the years since, he has soundtracked some of the world’s biggest dance music festivals, includingTomorrowland, EDC Las Vegas and Ultra Music Festival, garnering a reputation as one of the wildest live acts around. A typically busy summer sees him play South Korea’s World DJ Festival, Nameless Music Festival in his native Italy and OpenAir St. Gallen in Switzerland amongst others. Now Heavy, sees him unplugging the rock amps and heading back to the dance floor.

“Through Instagram, I saw that Tony Fresch was not only also living in Venice, CA, he was actually right down the street! So I messaged him and said ‘Come over! Let’s create together!’ And that very day we made Fkn Face. It’s a great house track. The universe works in wonderful ways.” explains The Bloody Beetroots’ Sir Bob Cornelius Rifo, when discussing on the collaboration with both producers.