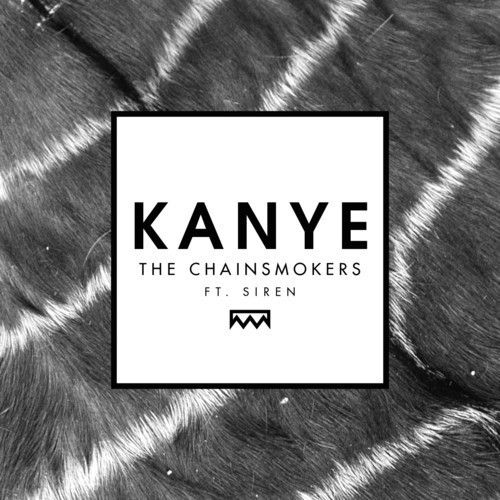 THE CHAINSMOKERS have revealed their brand new single “Kanye” featuring Siren, an LA based indie-pop duo.

Currently Top 10 in 9 different countries across the globe and #1 on Hypemachine, “Kanye” will be released in the UK on 12th October.

“Kanye” follows up one of the year’s biggest songs and cultural phenomena, “#SELFIE”. However, it’s quite a departure from the cheeky, crossover club anthem that put Andrew Taggart and Alex Pall on the map.

Provocative in both its name and stirringly gorgeous sense of melody, “Kanye” fuses Siren’s divine delivery and uplifting lyrics with THE CHAINSMOKERS entrancing and enigmatic production. Moreover, there’s a very special and ultimately inspiring message at the heart of this anthem. The word “Kanye” insinuates that only you can define what makes you individually happy. What other people think doesn’t matter, and do not let anyone take that happiness away from you. If you believe in yourself, anything is possible and no judging allowed!

Pall elaborates, “We look at the word ‘Kanye’ as an adjective. The song is about what it means to be like Kanye. It’s about just owning it no matter what you’re doing. Whether you’re on top of the world partying in a penthouse or you’re driving an old car playing your favorite song, it’s about enjoying the moment you’re in and feeling like you’re the king. You embrace that confidence. We didn’t want to do something to left field after ‘#SELFIE’, but we wanted to show another side of ourselves. What Siren does is just beautiful, and we built the production around that. It gets the message across. Own your shit, be self-assured, and remain confident in everything you do.”

In addition, the boys have launched an Instagram and Facebook campaign with the hashtag #BeLike. They’ve included a fun quiz that you can take here!

After returning from a packed European tour where they hit stages at both Tomorrowland and Ultra, things just keep heating up for THE CHAINSMOKERS after MTV recently crowned the group an “Artist to Watch”.

“#SELFIE” was officially certified platinum in the US for digital sales in excess of 1,000,000. The song also soared to #1 on Billboard’s Hot Dance/Electronic Songs Chart within merely five weeks and reached the Top 5 on iTunes in over 43 countries. “#SELFIE” is the #6 video on YouTube’s “Top Music Videos of 2014”. In the UK & Eire, ‘#SELFIE’ has been awarded a Silver BPI Award with 230,000 downloads to date.

THE CHAINSMOKERS puff out a distinct hybrid of indie, progressive house, and pop music that proves utterly infectious and intoxicating. It’s unlike anything out there, and the world is taking notice in a big way. Already, the pair has been supported by Nicky Romero, Steve Aoki, Pete Tong, Afrojack, Tiësto, W&W, and more, as well as receiving shout outs from the likes of Rolling Stone. In addition, they’ve been tapped for remixes by everybody from Phoenix, Ellie Goulding, and The Wanted to The Killers and Icona Pop. Their remixes continually shoot to #1 on the HypeM‹with 22 in total topping the chart. In addition, their original songs always land on Beatport’s top charts, solidifying their status as contenders in the genre. The duo is represented by Adam Alpert.  DIM MAK/REPUBLIC RECORDS is excited for what’s to come from this American dream team.