Mr TC - The Depths of Haze 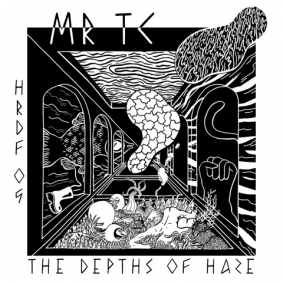 Mr TC - The Depths of Haze

The Hard Fist label notches up release number five from a fresh new family member in the form of Mr TC, with remixes from Lokier and Khidja.

At the forefront of the Glaswegian music scene, Mr TC moves through genres from new wave to post punk, industrial, disco and tropical oddities. He plays mesmeric live shows with synths, drum machines and guitars. This EP— which is an allusion to the origins of trippy dance music—is his first solo effort since 2016 and takes you to the void of space, seeking freedom from moral prohibitions and standards, refuge from sexual and gender prejudice, exile from oppression, and aims to rupture aesthetic boundaries.

Excellent opening track ‘Gay Haze’ is both a cheerful and dark bit of machine disco. It’s a slow beginning of an eccentric journey. Moist air, fetish gear, and a raw Glasgow vibe is all in there, while the title is a reference to the unmatched gay parties of Brussels which promote freedom and take pride in being weird. First up with a vital remix, Khidja keeps the idea of an odd trip driven by a Middle-East flute melody. It creates images of staring too long at a Lebanese sunset with a psychedelic jazz tone stuck in your head and your mind wandering.

Then comes ‘Depth Gauge,’ which stylishly takes you from the desert into the depths of the ocean. The former Middle Eastern setting becomes an Atlantis landscape surrounded by coral reefs, seaweed plants, octopus and jellyfish, with dub drums and sustained chords all sinking you into a state of hypnosis. Last of all, Lokier steps up with a remix that is undeniably mental, mixing dark wave, IDM and breakbeats. Hard Fist BPMs have never been so fast than here, as Lokier brings a feeling of distress and pushes the limits with an open heart and closed fist.

This is perfectly pumping club music with a menacing heart of real human emotions.