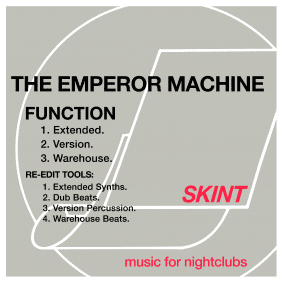 Studio wizard The Emperor Machine is back with more of his brilliantly inventive and colourful tracks as he joins the Skint family.

The UK artist, born Andy Meecham has long been dazzling dance floors with his synth heavy, tough edged and psyched-out disco beats. He has released solo as The Emperor Machine for labels like D.C. Recordings, Internasjonal and Southern Fried Records and has a long and revered history as part of Chicken Lips, and before that Bizarre Inc. He makes truly rugged club music with sci-fi influences and killer basslines that never fail to get the club in a sweat and he now brings all his prodigious talents to his new home at Skint.

This joining of musical forces seems to have been an inevitable outcome for imprint and artist, as label founder and creative director Damian Harris says “When they come to write the story of Skint Records & Andy Meecham – ‘Don’t Give up on Love’ – should be the title. ‘I always wanted to sign you’ I said. ‘I always wanted to be signed to Skint’ he said. 20 years on those dreams became reality. We met on a post by our mutual friend Erol Alkan. Facebook can’t be all bad if it facilitated this match made in dance floor heaven.”

Here he serves up three versions of new single ‘Function.’ It is an epic ten-minute masterpiece with cosmic chords and corrugated basslines that jerk your body. Hip swinging claps and timeless disco percussion pump the groove while the expansive synths bring the heat.

The excellent Warehouse Mix is a real throwback jam with big piano chords hammering away and getting hands in the air as the off-kilter drums bounce below. It’s feel good, timeless music that is widely appealing and hugely effective.

Finally, the Version mix is a loose limbed boogie-funk bomb. The slippery lead synth takes you on a journey as the drums twist and turn and the whole thing exudes soul and colour that will light up any party. The EP also includes a series of DJ re-edit tools that focus variously on a dub, synth, percussion and warehouse version.

As ever, The Emperor Machine has cooked up the sort of dance floor magic he is so well loved for.