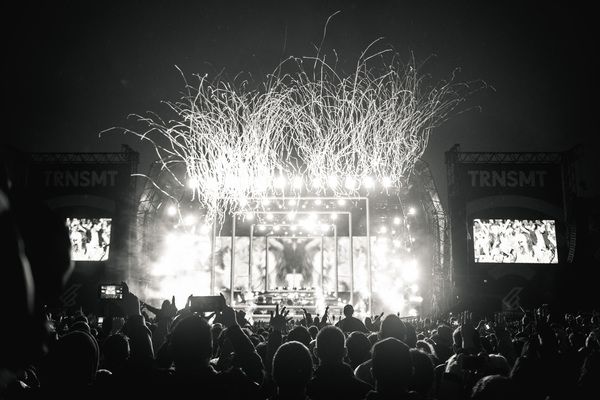 TRNSMT Festival will return to Glasgow Green in 2018 and will be extending its music offering across two weekends on 29th June – 1st July plus 6th and 8th July 2018, as revealed by festival organisers DF Concerts last week.

An era-defining voice and the frontman of his generation, Liam Gallagher has owned 2017. Set to play his biggest ever solo show in Scotland at TRNSMT next summer, he’s sure to bring tunes from the celebrated fastest selling vinyl record of the last 20 years with critically-acclaimed solo album As You Were as well as Oasis classics that have stood the test of time over the last two decades.

Taking to the Glastonbury stage earlier this summer, Liam Gallagher also picked up not one, but two Q awards this year as well as selling out shows across the globe in 2017.Liam’s return saw him go straight to the No.1 spot in the charts, outselling the rest of the Top 20 combined after shifting a massive 103,000 records in its first week. A recent trip to Glasgow saw Liam Gallagher film a new music video in King Tut’s Wah Wah Hut where Oasis were first discovered by Alan McGee in the 90s, with Liam tweeting: ”Back to the scene of the crime King Tut’s it's been too long…” Packed with waves of guitar hooks, melodies you can’t shake, thunderous rhythm and the iconic Liam Gallagher’s voice, we can’t wait to feel that pure electric atmosphere at TRNSMT next summer.

Joining Liam on the first weekend of TRNSMT 2018 are Courteeners, who’ve been described as “One of the best live British bands of the moment” by Clash Music. More than a decade of tours, swaggering anthems and five studio albums reached its peak forCourteeners in summer 2017 as the band played the biggest show of their career – an epic sold-out 50,000 capacity at Manchester’s Old Trafford cricket ground. The band's alternately jangly and bombastic brand of indie guitar rock lends itself to festival stages around the world. With big tunes from the debut record including ‘Not Nineteen Forever’ and ‘What Took You So Long’ carved out as pure indie classics, Courteeners’ appearance at TRNSMT 2018 will be sure to bring hero singalongs from that first guitar hook.

Wolf Alice released their acclaimed second album Visions Of A Life in September, which followed its predecessor to number two in the UK charts and is already a staple on end of year lists. Ahead of a sold out UK tour that ends at London’s Alexandra Palace on Friday, and included two nights at Glasgow Barrowland, The GRAMMY, Brit and Ivor Novello-nominated four piece bring an incredible passion, energy and atmosphere to their live performance, making their stint at TRNSMT 2018 one not to be missed.

And in the final announcement in this first wave announcement, TRNSMT are delighted to reveal that English grime artist, four-time MOBO nominated singer and breakthrough star of today’s rap scene  J Hus will also join these home grown British acts to play TRNSMT2018. J Hus has created a name for himself in 2017 with hit single ‘Did You See’ climbing the UK charts, plus an appearance on Stormzy’s album Gang Signs & Prayer and the release of his debut album Common Sense in May 2017. J Hus will perform for the first time at TRNSMT on 30th June, joining acts including Liam Gallagher, Courteeners and Wolf Alice.

In the first announcement from TRNSMT organisers, today’s news highlights the incredible British music scene right now with genres spanning rock, indie and grime; offering music fans a taste of what’s to come on the rest of Saturday 30th June and the other  four TRNSMT events next summer.

TRNSMT celebrated an incredible inaugural event in 2017 with stand-out performances from headliners Radiohead, Kasabian and Biffy Clyro all now firmly established in the TRNSMT hall of fame. Glasgow city centre will once again provide the backdrop to TRNSMT Festival in Glasgow Green next summer, offering fans an amazing summer of music with five events in the heart of the city.

Shortlisted for three UK Festival awards including ‘Best Major’ and ‘Best New’, TRNSMTwas heralded by fans and critics in 2017 for its incredible audience, atmosphere and perfect mix of international and local talent.

“It’s set to be a brilliant summer of music. We’re bringing some of the best world-class artists to Glasgow Green, with many more exciting announcements still to come. TRNSMT’s outstanding audience in July this year showed the world why TRNSMT should be central to the festival music calendar. Much like in 2017, TRNSMT will showcase some of the best up and coming talent in the UK, mixed with world-class artists so stay tuned as there’s so much more to come!”