Fallout - The Morning After 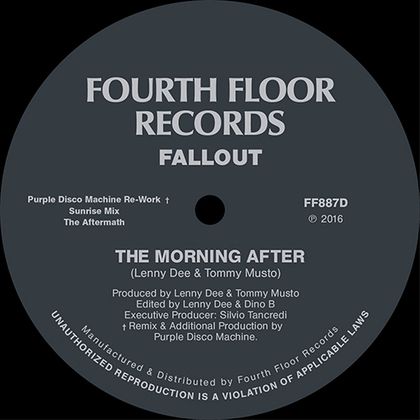 Fallout - The Morning After

Fallout ‘The Morning After’, Produced by Lenny Dee and Tommy Musto, was originally released in 1987 on the legendary Fourth Floor Records. Originally recorded as a 17-minute opus, the track was edited into different versions; the Sunrise Mix and The Aftermath. The names Fallout and The Morning After were Tommy and Lenny’s personal references to a private after hours club called the RoofTop on the 23rd floor of a building in New York where they played, named as a nod to the after effects of the late nights and early mornings of these parties. ‘The Morning After’ crossed many genres of dance music, and was notoriously adopted by Grooverider and Fabio who championed it at Rage, their legendary Thursday night party in London.

Remastered for this re-issue, and also tastefully remix by nu disco producer of the moment, Purple Disco Machine, a new lease of life awaits for this genuine classic which has truly stood the test of time.