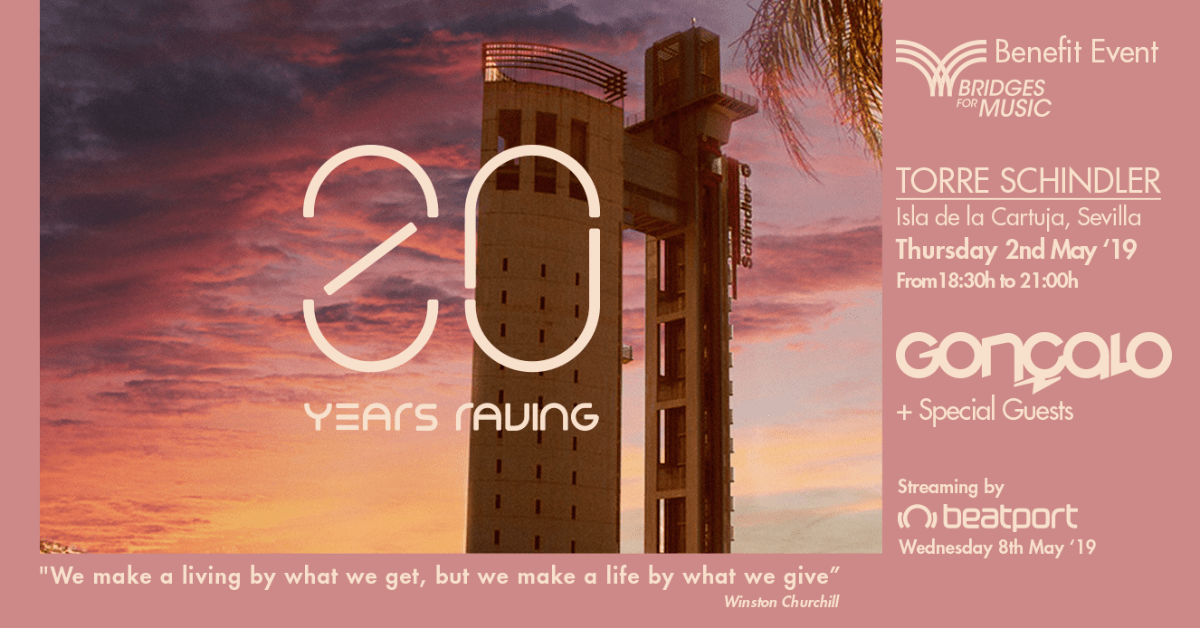 Gonçalo has decided to celebrate in style his two decades of career organizing a commemorative tour named “20 Years Raving“. A 10 day tour in which he will travel all over the world, sometimes alone and other times with huge artists who have been an important influence for him. The truth is that this new project by the Portuguese artist is being welcomed with great success as shown at his sell out gig at Industrial Copera in Granada, where more than 1,000 were unable to enter.

On his “20 Years Raving” tour, Gonçalo will hold a charity event at the emblematic Schindler Tower in Seville on Thursday, May 2nd between 7pm and 9pm. The two-hour session will berecorded on video and broadcast exclusively on May 8th on BEATPORT, the most famous electronic music platform in the world. Gonçalo will also perform with other surprise acts. The capacity will be highly exclusive, reserved for only 50 people who can get their tickets through an auction through JUST GIVING. The 50 people who win the bid will finally be those who access the event and contribute directly to this cause because all the money raised will be donated entirely to the NGO Bridges for Music.

LINK TO AUCTION ON JUST GIVING

At this non-profit organization they believe that electronic music is a universal language that can be used to break socio-economic barriers. In this sense, music and artists can help close the gap between different classes as well as races in developing countries. The artists are ultimately opinion leaders. Therefore, Bridges for Music brings together the main players in the music industry to support responsible development, a development that leaves a positive impact on disadvantaged communities and helps to create global awareness of local issues.

“We live so quickly that we hardly look around to realize how lucky we are, and how little others have.” A few years ago I met Valentino Barrioseta, at that time he was the director of one of the most emblematic clubs in Spain (Barraca – Valencia) and with a very promising future within the national and international music industry, my friend left everything to fulfill a dream: to develop Bridges for Music, an NGO that uses music to train young people in Africa, helping them to get off the streets.

This past winter I already supported them in ‘Cycle to ADE’, challenging my body and cycling nearly 900km between Berlin and Amsterdam to help raise funds to complete the construction of their academy in Langa (South Africa).

This is a very special year for me, I am celebrating 20 years as an artist and I am celebrating it with a series of events called #20YearsRaving. I was born in Portugal but I consider myself a Sevillian of adoption (and heart), a city that gave me everything and where I had the happiest moments of my life. For this reason I chose the shore of the Guadalquivir to do what is undoubtedly the most special and beautiful event of my career.

Fifty people will have the opportunity to live my most exclusive set, accompanied by some surprise guests and on top of the Schindler Tower, one of the most emblematic buildings of the Expo92. Tickets can be purchased through an auction and the money raised will be donated integrally to Bridges For Music”.

“WE MAKE A LIVING BY WHAT WE GET, BUT WE MAKE A LIFE WITH WHAT WE GIVE” Winston Churchill.

Located on the Isla de la Cartuja, this lookout tower was built for the 1992 Universal Exposition that hosted the city of Seville by architect Guillermo Vázquez Consuegra. Its more than 65 meters of height divided into 18 floors make it not only one of the most representative structures of the city but a space with the most privileged views of both the city and the Guadalquivir River.

Never before has the Schindler Tower hosted a musical event of this kind, which makes this celebration a unique experience.