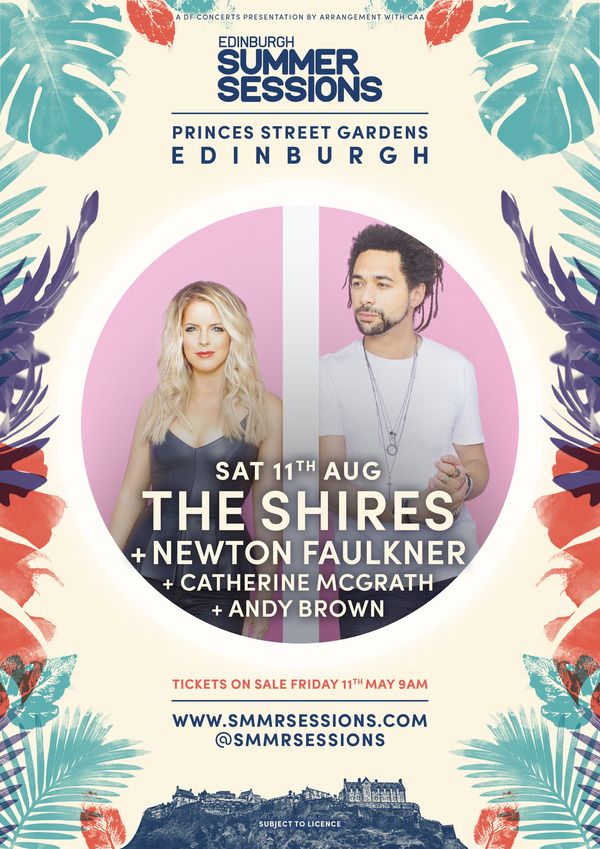 Taking place during the world renowned Edinburgh Fringe Festival, Edinburgh Summer Sessions’ headliners are; Sir Tom Jones, Bastille, The Shires, Rag’N’Bone Man, Paloma Faith, Kasabian and Brian Wilson. Set to be part of music festival history, these acts will take to the stage in one of the most beautiful live music locations in the world; the Ross Bandstand, with the breath-taking backdrop of Edinburgh Castle from the 6th– 19th August 2018. This new era in Scotland’s music scene provides a unique music strand to Edinburgh’s Fringe and adds to the capital’s already bustling electric atmosphere in the month of August.

Already breaking records as Britain’s biggest-selling country music act, The Shires will add another string to their bow as one of the first artists to headline the first ever Edinburgh Summer Sessions. The duo became the first English artists signed to a major label in the unparalleled home of country, Nashville and their second album became the UK’s fastest selling country album ever.  The Shires’ latest release, third album Accidentally On Purposehit No.2 in the UK Charts, and in 2017 they became the first UK act to win a prestigious Country Music Association award. They will bring hits including ‘Guilty’ and ‘Beats To Your Rhythm’ for an unforgettable set at Edinburgh Summer Sessions.

Ever-evolving singer-songwriter Newton Faulkner will make his debut at Edinburgh Summer Sessions, joining The Shires and Catherine McGrath on 11th August. Storming onto the scene with a debut album which went double-platinum, Newton Faulkner has subsequently built a career spanning over a decade and five albums later continues to surprise audiences and reinvent himself with sixth album Hit The Ground Running. Newton Faulkner’s songs seem made for a summer evening at Edinburgh Summer Sessions and the star’s return to the city is sure to be a highlight of the festival.

Set to release her debut album in July 2018, Catherine McGrath is a rising star in the country music scene, with the Irish singer-songwriter making waves around the UK and beyond. From learning to play the guitar from her grandmother to discovering country music through none other than Taylor Swift, and after only a few months in the industry, Catherine was soon writing in the home of country music, Nashville. At only 20 years old, Catherine McGrath is currently on her biggest headline tour to date and has all the makings of a true hitmaker with soulful songs like ‘Say You Love Me’ and ‘Talk of This Town’ in her set.

Andy Brown recently went solo following huge success with chart-topping band Lawson. The country singer-songwriter recently collaborated with Chrissie Rhodes of The Shires with single ‘Landslide’. Andy Brown is a welcomed addition to the The Shires, Newton Faulkner and Catherine McGrath line-up who are sure to bring the good vibes to the capital at this year’s Edinburgh Summer Sessions.

Edinburgh Summer Sessions’ artists will be part of festival history as they contribute to the city’s exciting new era of music in Princes Street Gardens. With legends of the music scene such as Sir Tom Jones and Brian Wilson, to some of the best young talent around like The LaFontaines and Catherine McGrath, Edinburgh Summer Sessions has something for everyone and the festival’s debut is not to be missed in August 2018.