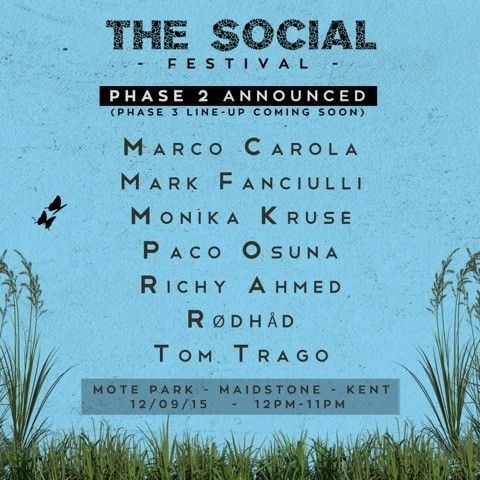 Keeping up the momentum of their already stellar line up, the team behind Nic Fanciulli’s flagship event have announced their phase two, fronted by techno legend and underground superstar Marco Carola. Since taking the Music On brand to new levels over the past three Ibiza seasons and selling out a string of worldwide events, Marco has become infamous in the underground scene for his mammoth techno sets.

Joining the Music On boss is Nic’s brother Mark Fanciulli. Known for favoring the darker side of techno – Mark has been steadily building his reputation on Europe’s underground techno scene for a number of years now and is expected to bring a decidedly darker element to the Kent countryside.

ENTER resident and Ibiza veteran Paco Osuna is next to join the line up. Bringing a distinctly Spanish flair to his sound and having gained many years experience playing alongside the world’s most highly regarded artists, Paco is a real DJ’s DJ and makes the perfect addition to the day’s techno heavy line up.

Hot Natured and Paradise regular Richy Ahmed is next to join label boss Jamie Jones on this year’s line up. The Geordie house extraordinaire is set to keep the Ibiza vibes in full force, having spent many years playing the white isle’s hottest venues and becoming a resident at DC-10’s weekly Paradise parties. He is joined by techno aficionado Monika Kruse, armed with a uniquely tech sound, Monika is expected to keep the sounds strictly underground.

Berlin mainstay RØDHÅD is also set to pass through the Mote Park festival. The self-described procurer of deep, powerful and melancholic techno has made a major impact on the underground scene since emerging on the world scene in the mid 1990s.

Rounding off the phase two line-up is Amsterdam powerhouse DJ and Voyage Direct label boss Tom Trago. The Legowelt collaborator has become a major figurehead of the Dutch techno scene and has helped push the underground to new heights while becoming a highly respected artist in his own right.

The Social Festival will be the perfect opportunity to sign off the summer with an intimate and memorable musical experience, with more acts to be announced in the coming weeks.