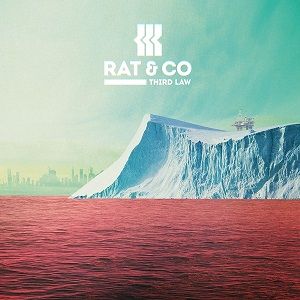 Spurred by the increasing dependence on artificial intelligence, ‘Third Law’ races into the future; as humans relinquish control and the voice of A.I becomes more prominent – will we lose all that makes us human?

Rat & Co’s first album ‘One (壱) Uno (壹) Ein’ was dubbed by Indie Shuffle as “the ultimate vibe album” while their second, ‘Binary’ reached # 7 in the electronic music chart on iTunes in the first week. Now, with ‘Third Law’ the band have received glowing support from the likes of Mixmag, Red Bull and Noisey, and as news of the three-piece spreads to different corners of the world, Rat & Co are fast becoming known for their transcendental sound.

‘Third Law’ is a whole listening experience where the songs are chapters, an overture to the full story. Speaking about the album Joshua Delaney says “We wanted to take our time with writing this album this is the album that we’ve always wanted to make.”

Rat & Co set their sights on mystery, wonder, isolation and beyond, sharpening their take on deliciously dark textures and exploration of expansive musical landscapes. Opening the album, ‘A Place Called Home’ summons a visual memory. The warm quality of a piano stirs into the depths of a dense forest as sunlight streams through the woods whilst a familiar timbre of birds echo. A.I is present, juxtaposed with the natural world. Released late last year, the first single LP ‘A.I’, combines their signature ominous layers and head-nodding beats. Sculpted by sampled vocals, middle-eastern influence and a post-apocalyptic condition, there is an alertness to the song where the trio set an ancient songline within a mechanic musical terrain. The result is punchy, unsettling and refreshing. Featuring breathy spellbinding vocals from Liahona, ‘Soldiers’ confronts a new world where soldiers stagger through a forgotten land in search for a new home. ‘Rumble’ propels forward, grinding and twisting with a brain-melting tension, while ‘Error’ warps and wobbles as A.I reconfigures glitchy beats.

Written in Japan, ‘Onsen Boy’’s arpeggiated chimes contrast a warm slide guitar, before a rare moment where we hear Waller’s guitar stand alone in the intro to ‘There Is No Help’. Delaney’s voice centers the track supported by Park’s live drumming. Minimal and simple, the song has a final quality to it, which leaves the question: have we let go and is everything over? Or have we found a new beauty in something original?

Rat & Co raise and engage with fascinating philosophical theories with the new album ‘Third Law’ – and if this is a glimpse into the world of Rat & Co, is Rat & Co a glimpse into our dystopian future? It’s your decision where we go from here…