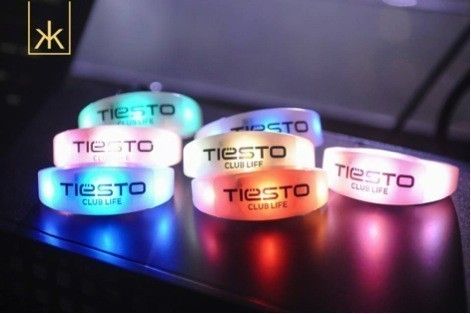 PixMob VIDEO, at the frontier of crowd activation, will be used for the first time outside of the Super Bowl by Tiësto as part of his residency at Hakkasan Las Vegas beginning on Friday, February 28 and then at the remainder of his shows there in 2014.

2,500 Tiësto fans will be wearing LED wristbands generating wireless video effects in sync with his music. Pulsating with light as one organism, the crowd will become a canvas for Tiësto’s visuals, creating an immersive experience seen only at the Superbowl.

PixMob’s technology uses infrared to send instructions wirelessly to pixels worn by audience members, creating colourful light effects across a crowd. PixMob VIDEO, the newest adaptation, allows show producers to create live video effects using the audience as a canvas. This patented and groundbreaking technique allows for real-time transmission of colour information onto any number of mobile pixels at hundreds of thousands of individual locations up to 300 meters away, without the need for geo-location. To see how it works click here: https://www.youtube.com/watch?v=yq6VoxoX7X4

As easy to use for in-house lighting directors as it is for the engineers who developed the system, PixMob VIDEO is controllable via computer. A video server sends a video feed to transmitters, which then send instructions to pixels at over 100,000 locations over wireless infrared in real time. The pixels then changes colour according to the information received, allowing the lighting director to include the crowd in a creative vision.

‘The main idea behind PixMob VIDEO is to offload the geo-location onto the video transmitter to keep the pixels simple and reactive’, says Vincent. ‘We’ve worked many years to create and fine-tune a PixMob transmitter that in essence is very similar to a traditional digital video projector. Our projector beams digital information over infrared onto people, instead of visible colors onto a white canvas’.

“I was absolutely amazed by what Pixmob was able to do at the Superbowl and can’t wait to team up with them for my own shows. Hakkasan is already one of the best clubs in the world, so to bring the Pixmob experience to my fans will be something really special,” Tiësto says.

Imagined in Boston in 2006 when CEO David Parent spent a week crashing with Vincent Leclerc at MIT, PixMob is the result of a desire to create interactive experiences with the ability to change human perception. PixMob looks to connect crowds to create innovative events such as the Arcade Fire balloon drop at Coachella 2011, the Cirque du Soleil Microsoft Kinect launch, the Eurovision Song Contest and the Super Bowl Halftime Show.

ABOUT TIËSTO
Tiësto is a performer who has transcended musical genres to create a global “Tiësto” brand. His achievements include: a Grammy nomination, numerous MTV awards, performing at the opening ceremony of the 2004 Athens Olympic Games to an audience of billions, and even a wax statue at Madame Tussauds. With over 16 million friends on Facebook, 2 million followers on Twitter, over 400 million views (and one million subscribers) on YouTube, his globally syndicated Club Life radio show as well as his Club Life iTunes artist podcast (#1 music podcast globally), Tiësto has truly become a universal phenomenon. Voted ‘The Greatest DJ Of All Time’ by Mixmag in 2011, the #1 DJ by Rolling Stone and recipient of DJ Mag’s first ever “Top 100 DJs Legend Award,” Tiësto has worked with superstars such as Kanye West, Bono, Coldplay, Katy Perry, Yeah Yeah Yeahs, Goldfrapp and many more. Tiësto is currently focusing much of his time in the studio on the production of his much anticipated studio album (to be released in Spring 2014). The first single from the album, “Red Lights,” is a global smash and one of the winter’s biggest club hits.