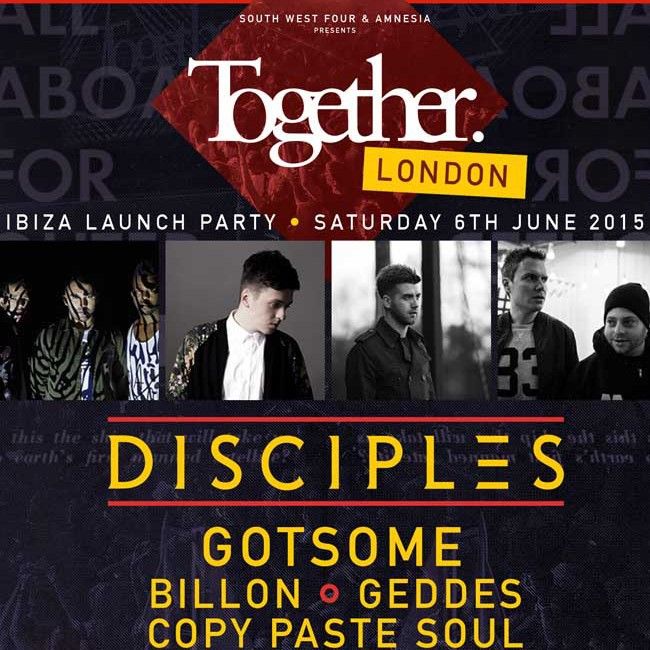 This summer Together will embark on its fifth successive season at the iconic Ibizan super club Amnesia. The sixteen date residency will welcome many of the world’s most exciting and forward thinking artists to the iconic venue with Together representing the definitive Tuesday night on the white Isle.

Ahead of the summer kicking off in earnest, Together will bring a taste of the Balearics to London by hosting a very special Ibiza launch party on Saturday 6th June at the legendary Ministry of Sound. For the London event, Together has handpicked a selection of the freshest talent the night is set to showcase this summer on the infamous party island. The Together Ibiza Launch Party is set to be a must-attend night for any house music lover. From one clubbing capital to another. London to Ibiza. This is Together.

With soon to be superstars Disciples already confirmed for the definitive Ibiza Launch Party, we’re hyped to announce the full line up which includes the freshest talent in the scene with the likes of Gotsome, Billon, Geddes & very special guests Shift K3Y & Chris Lorenzo all announcing that they’re joining the party. With so much talent and diversity packed into one line up, you can be assured this party is one for the books…

The trio known as Disciples are no doubt soon to become the powerhouse group in dance music. Their latest release ‘They Don’t Know’ is a soulful deep house groove that together with the diversity of their previous single, demonstrates an authoritative command of a variety of club sounds. With a brand new remix package following close after and huge support from major music tastemakers such as Annie Mac – “Heard it once. Loved it. No Brainer. Had to play it.” In addition to their records, the trio have been touring relentlessly around the globe, from London to Mexico, as well as performing remix duties from Coldplay and MK via Lana Del Rey.

Gotsome are the UK production duo that exploded onto the house and bass music scene in 2014 with their smash hit ‘Bassline’. The infectious track was championed by the likes of Annie Mac & B.Traits and was named Radio 1 ‘Track of the Day’. Released on the mighty Defected Records, their debut single got worldwide exposure and they’ve never looked back since. The pair have been on remix duties for the likes of FCL, Basement Jaxx & Moko whilst their latest track, ‘Vibe Out’, with the godfather of Grime, Wiley, has swept across the nation.

Signed to London’s leading underground institution Rinse and holding down a weekly show, Billon has shown his talent and worth from the start. His first productions “Turn it Around” & “Hurt Me” were infused with a mixture of House, Garage and Techno. His unique production ability immediately gained support from some of the biggest names in the scene, EZ, Skream, Bondax & MistaJam. He has also laid his handy work on remixes for the likes of Katy B and Route 94.

DJ and producer, Geddes is one of the true pioneers of the house and techno scene in London. Geddes is tireless in his quest to inject freshness into his surrounding nightlife and continues to be a consistently fresh source of musical escapades. With releases on Leftroom, Adam Beyer’s Truesoul imprint and an upcoming release on Mobilee records, he is sure to rock the dance floor on a beautiful summers day in the capital!

Only a few artists have seen such a rapid rise in the last year than Lewis Jankel, Aka Shift K3Y. The London-born producer shot to fame with smash hits ‘I Know’ & ‘Touch’ with his tracks hitting radio’s and clubs all around the country. His talents have taken him to the world famous Winter Music Conference in Miami where he featured on Steve Aoki’s Dim Mak party and the infamous Holy Ship. Come 6th June, the thousands of revellers packed into the iconic Ministry Of Sound will see the raw talent that Shift K3Y possesses…

Chris Lorenzo can be described as one of the most revered artists in his scene. His bass infused productions and versatility put him above the rest. 2015 has already seen Chris perform a stellar 60-minute mix for MistaJam on his BBC Radio 1Xtra show and pick up bookings from Creamfields, Park Life & South West Four. Lorenzo’s ability to read a crowd and awe-inspiring track selection make him a must have at any party.

With more acts to be announced across multiple rooms, you can be sure that Together’s Ibiza Launch Party will be a key date in London’s summer clubbing calendar.