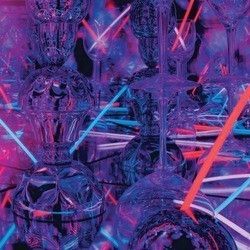 There are many ways to move forward as an artist. You can reinvent yourself, keep track of fashions, or try bold new things. Tom Trago has spent the best part of 10 years pushing his sound in impressive new directions. Yet on his new album, the well-regarded Amsterdam-based producer has done things slightly differently. This time round, his influences come from much closer to home, and he has admitted to being inspired by the dancefloor-focused style with which he made his name.

Welcome to The Light Fantastic. We’re sure you’ll enjoy the trip.

Trago is an old hand at this kind of thing. Back in 2009, his debut album, Voyage Direct, impressed with its warm, disco-centric blends of full-throttle deep house and boogie-influenced synthesizer funk. He cast his net wider on 2011’s Iris, choosing to work with a wide variety of international collaborators on an album that laid bare his myriad of musical influences.

On the Light Fantastic, he’s decided to “step back to move forwards” with a warm, involving set that puts the simple pleasures of the best dancefloor moments at its heart.

“I tried to go a bit back towards the style I was doing on Voyage Direct, so dancefloor beats with deeper impact,” Trago admits. “I was trying to male tracks that work on the dancefloor, but also move your heart.”

In some ways, The Light Fantastic is Trago in “back to basics” mode. Partly inspired by his ever-increasing travels around the world to DJ, it melds together a range of influences – deep house, vintage synthesizers, classic boogie, disco, Chicago jack, acid house, and even a dash of full-throttle rave revivalism on the raw funk of “The Elite” – on a set that sounds like it was painted in vivid colours by an artist at the top of his game.

“I’m like a professor in a lab, trying to make little ideas work,” Trago enthuses, warming to the theme. “The tracks are all there in my head, like a puzzle, and I have to make all the pieces fit together.”

The ‘back to basics’ theme extended to his choice of collaborators. Whereas Iris was notable for featuring an impressive cast list of international singers, musicians and producers, The Light Fantastic is more of a homegrown affair. While plenty of people lent a hand during the recording process, they were trusted locals from the Dutch electronic music scene, rather than outsiders.

“This time, I thought ‘whoever walks in the studio can get involved’,” he says. “If they walked in, they could sing, play some synths or do some mixing. A lot of people came to hang out and ended up lending a hand. It’s a much more fun way of working than sending your track to somebody across the other side of the World.”

There are many collaborations on The Light Fantastic, but listen out for contributions from Steffi, Ben Westbeech, “studio neighbour” San Proper, Makam, vocalist Holly Wood and, most surprisingly, a local club owner who just happened to swing by the studio. “Using my friends was a big part of the process,” Trago admits. “One of the points of the album was using people who were close to home, part of the family almost.”

By the time the rush-inducing positivity of “The Wrong Right” gives way to the mutant alien funk of album closer “Desire”, you’ll be ready to listen to it all over again. That’s the thing with The Light Fantastic – it’s a trip you’ll want to take again and again.