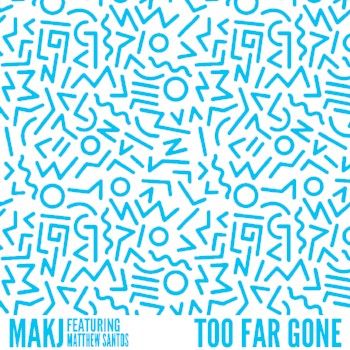 LA based DJ and producer MAKJ (aka Mackenzie Johnson) has delivered his new single, a synth-laden electro production titled ‘Too Far Gone.’

Having spent much of his career collaborating with some of today’s most talented DJs, his new solo track, ‘Too Far Gone,’ bridges the gap between Johnson’s early career and his return to more mainstream roots with 80’s inspired electro sounds and a deep bassline underpinned by the dreamy vocals of Chicago singer-songwriter Matthew Santos.

Entering the music world after a successful stint abroad as a racing car driver, MAKJ’s first first meaningful exposure to DJing came at the Macao nightclubs he and his teammates would frequent after races. Self-taught in the art, the legendary DJ AM chose to mentor MAKJ, a figure whom the American still credits to this day as a major influence on the trajectory of his career.

His trademark mashups eventually caught the eye of Hardwell, with whom Johnson recorded “Countdown” in late 2013. Since then, MAKJ has released a dozen critically-acclaimed tracks, partnering each time with different labels and artists including Lil Jon (“Let’s Get Fucked Up,” 2014), theBassjackers (“Derp,” 2014), and Andrew W.K. and Timmy Trumpet (“Party Till We Die,” 2016).

"When producing this record, I found myself really digging deep into the organic music side of my brain,”said MAKJ. “This record speaks on so many different years of my life.  From the '80s inspired synths, to the live drums, new wave rhythm, and vocals from Matthew.”

“All of this was inspired from my childhood listening to, "Talking Heads", "Men Without Hats", "The English Beat", and "Savage Garden." Being able to really connect the dots with my childhood on this record where me, as "MAKJ", can still be heard, but also I can push forward my influences of new sounds.  I really wanted to make this an art piece, not just another single."

Enjoying a career that has seen MAKJ play at some of the largest and most prestigious music festivals in the world, including Coachella, Voodoo, Electric Zoo, and Ultra, MAKJ maintains a residency at the Wynn Las Vegas as his stock continues to rise.

‘Too Far Gone’ feat. Matthew* Santos serves as an embodiment of MAKJ’s diverse and dynamic production talents and is set for release on 10th November.