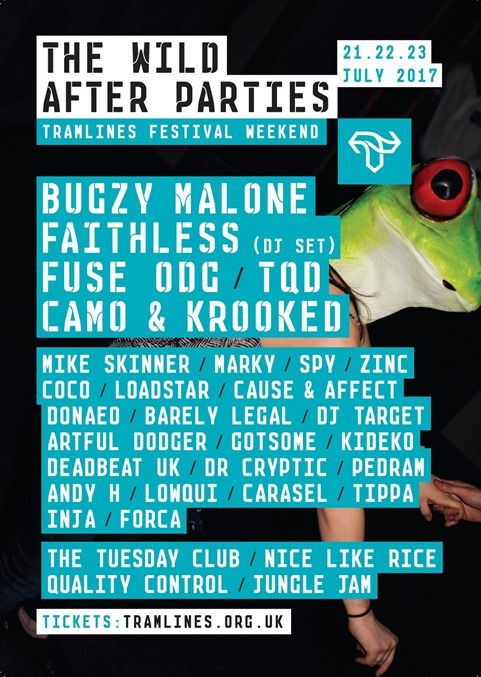 Tramlines is well-known for its genre-busting live music programme, showcasing internationally acclaimed talent alongside the hottest emerging bands. When the sun sets over Sheffield, though, Tramlines is transformed as it takes over the city’s best clubbing spots for two consecutive nights of unadulterated fun.

For all things garage and grime, head to the o2 Academy on Friday 21 July. The lineup includes TQD – better known individually as Royal-T, DJ Q and Flava D – who will bring a high octane set of classic garage and bassline to the dancefloor. Joining them will be MOBO nominee Bugzy Malone, Sheffield's own MC Coco, UK garage legend Artful Dodger and DJ Barely Legal. Meanwhile, Sheffield’s finest, including Deadbeat, DR Cryptic and Forca will be appearing in support.

Saturday night at the o2 Academy sees Fuse ODG heading up the bill, as the multi-platinum Ghanaian-born party-starter unleashes hits like Dangerous Love and Light It Up. After road-blocking the o2 Academy at Tramlines 2015, The Streets’ Mike Skinner returns with a record box full of everything from old-skool to hip-hop. Also touching down is Radio 1 Xtra DJ and Roll Deep cornerstone DJ Target and Gotsome, whose edit of Kayne West’s Fade has been spun by Pete Tong and Gorgon City to name just two. Cause & Affect will showcase a blend of tech-house, bassline and garage, while producer/rapper Donaeo will hype up the crowds with his latest single Black, which features JME and former Tramlines headliner Dizzee Rascal.

At Sheffield University's Octagon, festival-goers can get lost in more sensational DJ performances, with Faithless founder Sister Bliss demonstrating an impeccable selection of house and tech-house, and new kid on the block Kideko turning out big tunes such as Crank It (Woah) on Friday night.

Saturday night at The Octagon is a melting pot of sounds headed up by Camo & Krooked, who returns to Tramlines by popular demand. Drum & bass royalty DJ Marky will spin his unique, funk-laced style, as heard on the likes of It’s The Way and Silly. DJ Zinc, an artist who has sold over 1,000,000 physical records, including the era-defining Super Sharp Shooter, also appears. 'Producers' producer' and one-time DJ Marky collaborator S.P.Y joins the lineup, alongside Ram Records' Loadstar (formerly known as Xample & Lomax), and the globally recognised MC Lowqui, whose razor sharp lyrical delivery will show why he’s the MC of choice for the Metalheadz family, DJ Marky and S.P.Y.

“We love to watch the whole of Sheffield coming out to party for the Tramlines weekend, and this year is set to be no different. The newly announced after-parties mean that music-lovers can keep dancing for the whole weekend. We're delighted to be bringing exciting new talent like Donaeo to the Sheffield stage, as well as showing off our own, home-grown rising stars like Coco.”

More Tramlines after-party acts are yet to be announced. For further lineup additions and up-to-the-minute information about Tramlines 2017 visit www.tramlines.org.uk or follow Tramlines on Twitter @tramlines