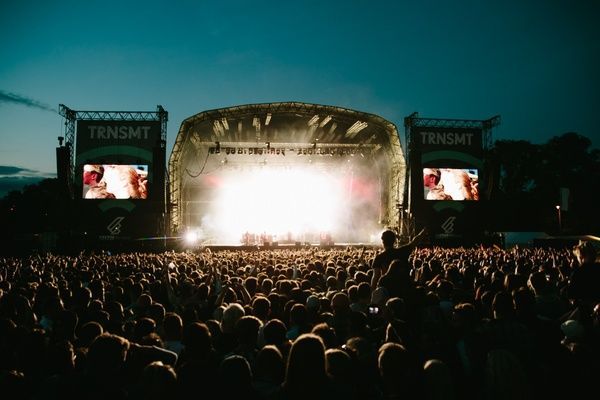 TRNSMT Festival will return to Glasgow Green in 2018 and will be extending its music offering across two weekends. The main festival weekend will take place over three days on 29th June – 1st July with two shows taking place the following weekend on 6th and 8th July 2018.

Glasgow city centre will provide the backdrop to TRNSMT Festival in Glasgow Green and the brand new two-weekend experience will deliver a world-class festival line-up set to be revealed later this month.

A country already renowned for its captivated music audiences, TRNSMT 2017 showed artists from around the world that there’s nothing better than a Scottish crowd and 2018’s extended experience promises to deliver an even more exciting transmission.

After an unforgettable musical experience in July 2017, TRNSMT launched with a line-up to delight music lovers, gig goers and festival fans alike. TRNSMT is delighted to be able to bring people together for even more music, firmly establishing the event at the heart of Scottish music.

With TRNSMT’s first ever headliners Radiohead, Kasabian and Biffy Clyro cemented in the festival’s Hall of Fame, memories still shine bright. In a weekend that saw over 120,000 descend on Glasgow Green, the sun shone for the likes of Belle and Sebastian, The Kooks and Stormzy and as Glasgow received the festival’s final transmission, fireworks lit up the sky, bringing to an end a phenomenal weekend of live music for Scotland.

Following the truly celebratory news of an additional weekend of music, the forthcoming summer 2018 festival events will pick up where the iconic Glasgow Green performances left off. TRNSMT will once more unite music fans from across the country, and beyond.
Fans should stay tuned to TRNSMT’s signal to find out more about two of Scotland’s biggest weekends in the music calendar, ensuring 2018’s continued transmission is better than ever before.

Festival organisers DF Concerts are finalising the finer details and will be in touch with allTRNSMT Early Bird ticket holders and deposit scheme buyers shortly. Loyal fans, who have already purchased their tickets or entered the deposit scheme, should rest assured that they will have the chance to curate their own unique TRNSMT Festival experience in the light of this exciting news.

CEO of DF Concerts, Geoff Ellis, said: “After such a successful first year in 2017, we’re absolutely delighted to extend the transmissions at TRNSMT Festival into two weekends to better the experience for the amazing TRNSMT fans next year.

“We’re bringing even more of the best artists from around the world to Glasgow Green and making sure Glasgow is the place to be this summer. The event is now established at the heart of the Scottish music calendar and we are looking forward to announcing the line-up for both weekend soon, as well as the additional festival aspects TRNSMT has to offer, so stay tuned!”

“Between now and next summer, it is important that everyone involved focuses on making TRNSMT the best event it can be – and one which is supported by and benefits the local community.

“Cultural tourism is extremely important to us and a festival, held in the city’s premier events space at Glasgow Green, will play a key role in bringing people to the city from all over Scotland and further afield. That is not only good news for the thousands of people who will enjoy the event; but for hundreds of city businesses in the tourism, leisure and hospitality sectors that support thousands of jobs.”