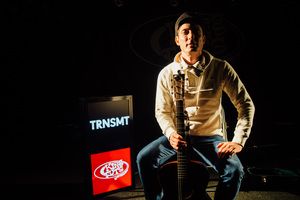 Set to play the King Tut’s Stage Powered by Utilita, Be Charlotte, Gerry Cinnamon, JR Green, The LaFontaines, The Van T’s, The Vegan Leather, Vistas and Wuh Ohdemonstrated their festival credentials on stage, with some of the acts performing special one-off warm-up covers of the headliners, before this year’s festival.

Be Charlotte performed an incredible acoustic cover of Biffy Clyro’s 'Machines'. Catching up with the Dundee singer-songwriter after her performance Charlotte Brimner said: “Everyone is so excited today! There's always something special about the first ever festival. It's an amazing lineup and it's nice to be able to be a part of that and to still be an unsigned band.”

Glasgow’s Gerry Cinnamon brought the iconic venue’s stage to life, with his outstanding rendition of Catfish and the Bottlemen’s ‘Cocoon’, whilst The Van T’s performed a beautiful version of Radiohead’s ‘Climbing Up the Walls’. Gerry Cinnamon said: “Glesga Green. Who doesn't want to play there?. I've been hibernating in the studio for the last year so it'll be good to get back in about it. Once I'm on stage it'll be business as usual."

The Vegan Leather brought the fun to Tut’s with their version of The 1975, ‘Somebody Else’ and Vistas picked the chart-topping ‘You’re In Love with a Psycho’ by Saturday headliners Kasabian.
JR Green, The LaFontaines and Wuh Oh joined fellow King Tut’s Stage powered by Utilita acts and spoke about their upcoming performances at TRNSMT. The LaFontaines will headline the stage on Saturday 8th July and frontman Kerr Okan said: “It’s always great to be part of something new and exciting, and with such a strong lineup, you can tell it’s going to be special. Scotland’s been crying out for a premier festival – hopefullyTRNSMT will fit the bill.”

Dance fans can look forward to an outstanding line- up at #SmirnoffHouse, curated by the one and only Mixmag. The stage will play host to unmissable performances from electro-goddess Monki, Syreeta, Jaguar and Feel Good Smalls on Friday 7th July .  A DJ set from Dance pioneers Coldcut, Nightwave, jazz-queen Rebecca Vasmant and Mosteph on Saturday 8th July and Glasgow's own Jasper James, Columbian twin DJ duo The Menendez Brothers, Silicone Soul and Sean Claude on TRNSMT’s closing night. Full line up can be found below.