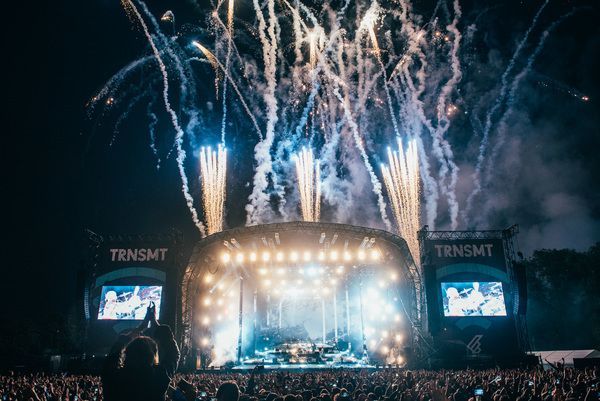 TRNSMT will once again programme an immense summer of music in Scotland, returning to Glasgow Green over two weekends on 29th June – 1st July plus 6th and 8th July 2018. These five shows are set to bring music fans the ultimate festival experience, with world-class stars descending to the TRNSMT stage.

Welsh heroes and one of Great Britain’s best live bands Stereophonics will take to theTRNSMT stage for the first time next summer on the opening day of the festival, bringing huge hits and festival favourites from a career spanning two decades. With ten studio albums under the belt, six of which were UK number ones, there will be no shortage of singalongs on display during the Stereophonics’ set at TRNSMT 2018. 2017’s Scream Above the Sounds firmly stated that Stereophonics’ continue to write vibrant, contemporary records and are as potent a force as ever; their appearance at TRNSMT is sure to get the party well and truly started.

Kelly Jones said: "TRNSMT line-up looks like a great weekend for all! Happy to be headlining the Friday and getting another chance to play in front of the beautiful always up for it Scottish crowds!"

Irish trio The Script join TRNSMT’s opening day line-up, set to bring a dose of acclaimed pop rock to Glasgow Green. Releasing their fifth album Freedom Child in September 2017, The Script will perform hits such as ‘Rain’, ‘Hall of Fame’ and ‘For the First Time’ for their Scottish fans. The Script have no shortage of accolades with four UK number one albums, a support slot for U2 in their hometown stadium Croke Park and festival slots around the world.

Joining Stereophonics and The Script on 29th June 2018 is James Bay. From the moment that he was announced as winner of the BRITS Critics’ Choice Award in 2015, to 12 months later when he was nominated for 4 prestigious awards in the 2016 BRITS ceremony, James Bay’s journey has been exciting for the masses to follow. His debut album, Chaos and The Calm, entered the UK charts at No.1 in March 2015 and stayed in the top 20 for a staggering 40 weeks, reaching platinum status in the UK. Few artists manage to achieve so much on their debut record but then James Bay is a singular modern talent, a lightening–in-a-bottle performer that’s instantly connected with so many audiences around the world. For this Hertfordshire troubadour this is just the beginning. With a fresh style and energy emerging in recent weeks following a hiatus, James Bay’s new album is said to be inspired by Frank Ocean, David Bowie and LCD Soundsystem – something we’re sure will go down a storm at TRNSMT 2018.

Completing the latest announcement is singer-songwriter Jessie J who will bring her hip-hop and R&B vibes to Glasgow in June, also joining the bill on Friday 29th June 2018.Jessie J’s debut album in 2011 spawned massive singles such as ‘Do It Like a Dude’ and ‘Price Tag’, which topped the charts in over 19 countries. Multi-platinum collaboration ‘Bang Bang’ saw Jessie join forces with fellow queens of pop Nicki Minaj and Ariana Grande and showcased Jessie’s powerful mix of soulful vocals with hip-hop beats. With the announcement of her fourth album R.O.S.E and release of her single ‘Queen’ in recent weeks, Jessie J ‘s powerhouse act is well and truly back and we can’t wait to feel her powerful stage presence at TRNSMT 2018.

Last week, TRNSMT announced Liam Gallagher will play his first ever outdoor Scottish gig on Saturday 30th June 2018, joined by fellow British rock Courteeners, Wolf Alice and J Hus. In a line-up that celebrates the cream of the British crop right now, the acts are set to bring an iconic electric atmosphere to Glasgow Green next summer.

An era-defining voice and the frontman of his generation, Liam Gallagher has owned 2017 with his solo return, Courteeners have been dubbed one of the best live British bands of the moment by Clash Music recently and, fresh from two sell-out Barrowland shows, Wolf Alice are quite simply one of the most epic and energetic British bands of our time. Also revealed by festival organisers last week was hot English grime artist, four-time MOBO nominated singer and breakthrough star of today’s rap scene J Hus, who also joins these home grown British artists on the opening TRNSMT 2018 weekend.

Today marks the second host of announcements from TRNSMT organisers, offering music fans a taste of what’s to come at five TRNSMT events next summer.

A city already renowned for its captive music audiences, TRNSMT 2017 showed artists from around the world that there’s nothing better than a Scottish crowd and 2018 promises to deliver an even bigger transmission.

Big performances from headliners Radiohead, Kasabian and Biffy Clyro created an epic inaugural event for TRNSMT in 2017, which also saw stand-out sets from the likes of Belle & Sebastian, Stormzy and The 1975.

Shortlisted for three UK Festival awards including ‘Best Major’ and ‘Best New’, TRNSMTwas heralded by fans and critics in 2017 for its incredible audience, atmosphere and perfect mix of international and local talent.

Geoff Ellis, Head of DF Concerts said: “Geoff Ellis, Head of DF Concerts said: “Today’s announcement of headliners Stereophonics plus The Script, James Bay and Jessie J brings yet another brilliant taster of TRNSMT 2018.  We were delighted to bring the news of Liam Gallagher’s headline show to the masses earlier last week and TRNSMT’s line-up is shaping up to be a brilliant celebration of world-class bands and local talent, over two weekends, for the first-ever time in Glasgow.”

Presale begins at 9am on Wednesday 29th November from www.TRNSMTfest.com

Tickets go on sale at 9am on Friday 1st December from www.TRNSMTfest.com