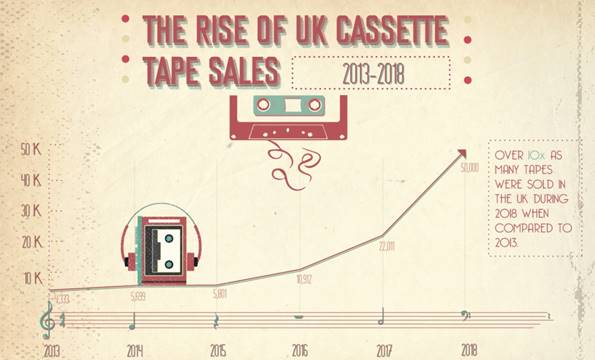 In an era of music increasingly dominated by online streaming, there has been plenty of speculation about the ‘death’ of the physical formats: vinyl, CD, tape. However, judging by the UK’s music buying habits across the last year, it looks like there is still plenty of resistance and more than a few reasons to be optimistic.

Norman Records have been digging through industry facts and figures from the past year and plugged in some juicy insights of their own to give you a unique overview of the UK’s listening habits.

While CD sales saw another bad year in 2018, and vinyl records have continued their resurgence, the real surprise has come from cassette tapes which seem to be enjoying a definite and exciting comeback.

There is no more fulfilling way to listen to music than via vinyl record. Placing a record on a turntable and listening, uninterrupted, through your favourite album is always going to be more satisfying than letting a streaming service shuffle you through their algorithm-driven playlists.

The huge success of Record Store Day (this year on Saturday 13th April) illustrates just how much the format has captured the public’s imagination, with music fans queuing round the block for a chance to get themselves a stack of sought-after LPs.

And Brits en masse are apparently wising up to this, as sales across the UK have grown year-on-year over the last decade.

Vinyl record sales are now at their highest level since the early 90s with over 1 in 10 of all physical albums purchased now on vinyl. In total, there were 4.2 million records sold in the UK during 2018. Not bad for a ‘dead format’.

While plenty of music fans are still making use of their CD players (including the people that inexplicably helped get three Now That’s What I Call Music compilations into 2018’s top 10 albums), there has been a sharp decline in the numbers being sold across the past decade.

32 million CDs were sold in 2018 – that’s almost 100 million fewer than in 2008. Ouch. Although this isn’t really surprising when you consider that sales are experiencing an average drop of 9.6 million sales year-on-year.

The Rise of Cassette tapes

On the flip side of that coin, however, 2018’s cassette tape sales saw a drastic leap of 125.3% when compared to 2017 and accounted for the largest volume sold since 2004. Nearly 50,000 cassette albums were bought last year, according to new figures from the British Phonographic Industry.

2018’s biggest-selling act on cassette was The 1975: their latest album, A Brief Inquiry Into Online Relationships, sold a very decent indeed 7,523 copies.

They were joined in the top 10 by The Prodigy (their no.1 album No Tourists reaching 2,148 cassette sales) and both editions of the Guardians of the Galaxy soundtrack – Awesome Mix 1 & 2 – which have maintained popularity thanks to savvy marketing focused on the use of the tape format by Chris Pratt’s Star-Lord in the Marvel films.

Like any good story, there are plenty of ups and downs in the physical music market but – where vinyl and tape are concerned – it seems like the next few years will continue their upward trend. Not all music fans have yielded to the siren call of Spotify quite yet.