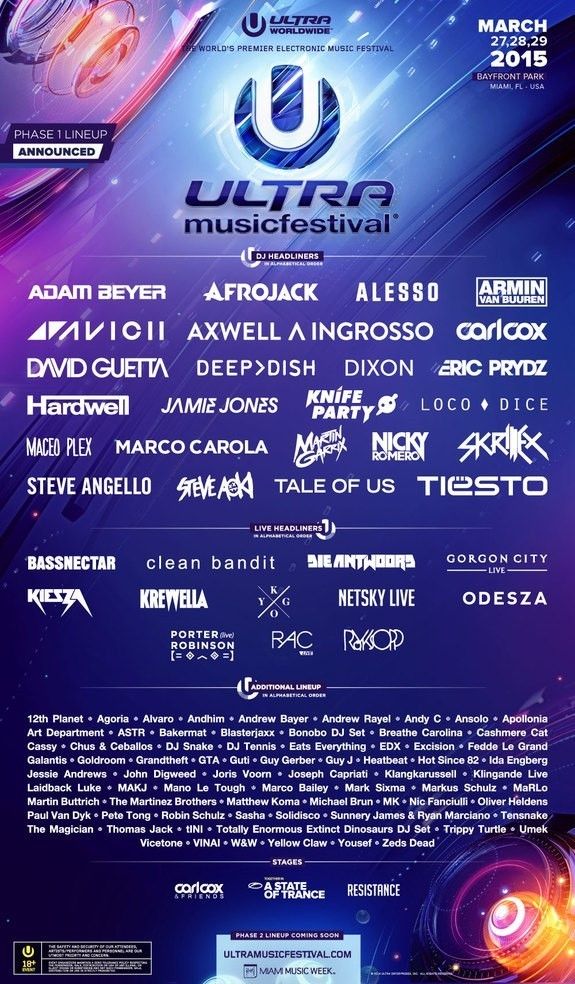 Ultra Music Festival has today revealed Phase One of the DJ and Live Performance lineup for its seventeenth annual edition, taking place on March 27, 28 and 29, 2015 at the beautiful Bayfront Park in downtown Miami.

With the Phase One announcement, Ultra Music Festival can once again lay claim to releasing one of the most exciting and diverse festival billings in recent memory, with every genre across the electronic music space represented by the biggest and freshest acts on the planet.

AVICII will make his long-awaited return to the newly designed Ultra Main Stage having missed his 2014 performance due to illness. Famed for saving his most electrifying performances for the Ultra crowd (playing alongside Madonna in 2012 and debuting brand new material from his chart topping album ‘True’ in 2013), if past years are anything to go by fans are in for another incredible spectacle from the Swedish star. Fellow countrymen AXWELL^INGROSSO will be making their eagerly anticipated debut as a duo at Ultra Music Festival Miami, following a mesmerizing set at Ultra Japan in September 2014 and scheduled headlining sets at both Ultra South Africa and Buenos Aires in February 2015. With their first album as a pair set for release next year, a whole host of incredible new material is guaranteed to air. To add to the Main Stage fun, the likes of AFROJACK, ALESSO, ARMIN VAN BUUREN, DAVID GUETTA, ERIC PRYDZ, HARDWELL, KNIFE PARTY, MARTIN GARRIX, NICKY ROMERO, SKRILLEX, STEVE AOKI, STEVE ANGELLO and TIËSTO will all return to transform Bayfront Park into the world’s greatest electronic music gathering.

As a festival that prides itself on providing its fans with a huge range of varying sounds and experiences, Ultra Music Festival has also confirmed some of the most respected techno and deep house performers to join the more recognized names as headliners, with acts such as ADAM BEYER, CARL COX, DEEPDISH, DIXON, JAMIE JONES, LOCO DICE, MACEO PLEX, MARCO CAROLA and TALE OF US all preparing to bring their A-game to a range of the world’s most technically advanced stages.

Forever pushing the boundaries with its revolutionary live programming, Ultra’s now-legendary LIVE STAGE brings us something from every corner of the electronic music spectrum. Grammy-nominated RÖYKSOPP will play Ultra for the first time since 2011 to showcase their recently released (and what they claim to be their final) studio album, while South African rap duo DIE ANTWOORD, electronic group CLEAN BANDIT and Canadian vocalist KIESZA will all bring a different energy to the festivities, as they take to Ultra’s flagship festival for the very first time. Perhaps two of the most eagerly awaited shows across the weekend will come from Tropical House pioneer KYGO and virtuoso producer PORTER ROBINSON, who will each bring their own array of eclectic sounds to the befitting and iconic Klipsch Amphitheatre. With BASSNECTAR, KREWELLA and NETSKY assured to lay down a boatload of bass, Phase One also sees the likes of GORGON CITY, ODESZA and RAC confirmed to showcase their distinctive live shows.

Ultra ambassador and crowd favorite CARL COX returns to the ULTRA MEGASTRUCTURE for a groundbreaking eleventh year, in which the techno king will host his legendary CARL COX & FRIENDS across Friday, March 27 and Saturday, March 28. Trance icon ARMIN VAN BUUREN will then take the reins of the fabled Megastructure on Sunday, March 29, to ensure the festival ends with a bang as he brings his ‘TOGETHER IN A STATE OF TRANCE’ show to the masses. Ever up-to-date with the latest trends in underground music, Ultra will also introduce a new setting this year in the form of the RESISTANCE stage, which will boast some of the very best techno and house from the world’s most exciting underground talent. Further information on all stages will be revealed in the coming weeks.

In another Ultra first, AMERICAN AIRLINES will offer an exclusive 15% DISCOUNT to all travelers flying to Miami from Latin America, a first also for the United States’ largest airline. Using the promotional code ‘ULTRA2015’, fans from Argentina, Belize, Bolivia, Brazil, Chile, Colombia, Costa Rica, Ecuador, El Salvador, Guatemala, Honduras, México, Nicaragua, Panamá, Paraguay, Perú and Uruguay will be offered the chance to use this exclusive discount and travel to Miami in style with American Airlines*. This discount booking window closes on January 20.

Furthermore, Ultra Music Festival and American Airlines are partnering with the only triple 5-Star hotel in Miami, The Mandarin Oriental, Miami to offer Ultranauts from Brazil, Mexico and Peru the chance to win a once-in-a-lifetime prize. One pair of winners from each country will receive TWO return flights to the 2015 Miami Event, THREE nights in the Mandarin Oriental and TWO tickets to the entirety of Ultra Music Festival on March 27-29. This competition is open until February 18. Participants from Mexico and Peru can enter HERE. Participants from Brazil can enter HERE.

Ultra Music Festival takes place March 27-29, 2015 during Miami Music Week and is an 18+ event. General Admission tickets for the seventeenth edition of Ultra Music Festival are currently on sale priced at $449.95—$50 less than the 2014 event. VIP tickets are priced at $1,149.95 and for the last two years, have sold out instantly after the Phase One Announcement. These prices include taxes and fees though a nominal shipping surcharge will be added.