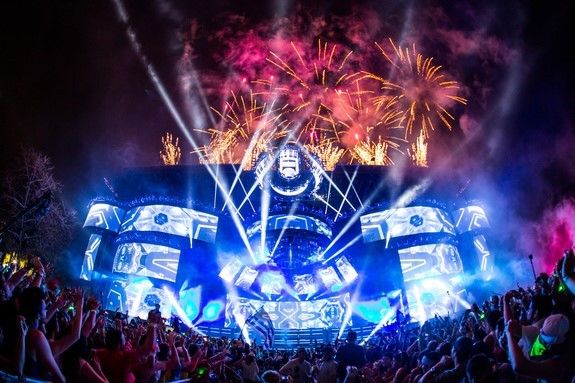 Ultra Music Festival ended things with a bang Sunday, March 29, as some of the world’s most celebrated names in music played a part in what was another record-breaking weekend for the World’s Premier Electronic Music Festival.

Marking the first year that event organizers enforced their new 18+ age limit on attendees, the talent on the bill nevertheless remained as diverse as ever, with every genre imaginable represented across the three days. If 2014 was the year in which dance music truly broke out into the mainstream, Ultra Music Festival in 2015 was when the cross-genre collaboration came to life, with live performances from globally celebrated artists such as Justin Bieber, Ariana Grande, Usher, Diddy and O.T. Genesis all taking to the stage to support various performers over the weekend. The results were nothing short of spectacular, with records being broken left, right and center for those attending the event and also watching online.

Welcoming a record 92 different nationalities to its home at Bayfront Park, all eight stages remained awash with flags from every corner of the globe throughout the weekend, with countries as far reaching as Kenya and Georgia being represented for the very first time.

The vast number of different cultures present was ever clearer online, where viewers tuned in to the Ultra 2015 Live Stream in record numbers. Produced by UMF TV™, streamed exclusively via Twitch.tv and powered by 7UP, the burgeoning platform saw over 12.5 million views from over 192 countries worldwide across the three days. By comparison, this was 3 million up from the previous year and the number even surpassed the 2013 stream of 11 million views, which, of course, ran over two weekends.

For the second year running, Ultra Music Festival was also the #1 trending item on both Facebook and Twitter across the three days, with artists such as Skrillex, Avicii, Axwell^Ingrosso and Martin Garrix landing in the Top 10 trending items worldwide during their respective performances.

Designed and created by Ultra Music Festival’s Creative Director, Richard Milstein and featuring mapping design by V Squared Lab’s, Vello Virkhaus, the Ultra Main Stage was once again hailed a resounding success, as its array of boisterous LED screens and immaculate sound literally shook its crowds to the core with each and every performance. Not even the rain that gave the event a good dampening on Friday evening deterred the colossal crowds from celebrating the festival’s seventeenth edition.

This year’s brand new Resistance™ Stage, powered by Arcadia Spectacular, was also a resounding success, with a debut festival appearance from Claude von Stroke and Green Velvet collaboration, Get Real, standing out amidst a host of other heavyweight sets in the tech-house world from Maceo Plex, Tale of Us, Dixon, Jamie Jones, Art Department and many more. The 360-degree setup was a fresh reminder of Ultra’s continued dedication in delivering the most inimitable and immersive experiences for their fans as thousands witnessed the state-of-the-art production that had so famously made its name over the years at Glastonbury.

Not to be outdone, Carl Cox hosted his legendary Carl Cox and Friends show for an incredible 11th year in a row inside the famed Megastructure. Joined by the likes of Seth Troxler, MK, Marco Carola, John Digweed and Loco Dice to name but a few, the Godfather of Dance put on a special show for the masses across Friday and Saturday before Armin van Buuren closed the house down with Eric Prydz, Paul Van Dyk, Markus Schulz and Andrew Bayer on his ‘Together In A State of Trance’ Sunday.

Die Antwoord, Röyksopp, Big Gigantic, Kiesza, Clean Bandit, Porter Robinson, Kygo, Krewella and Bassnectar were just a handful of world-beating acts to grace this year’s expertly curated LIVE Stage, with hordes of fans on hand to witness some of the most elective and creative music on show this year.

“…you’d be hard-pressed to find a better showcase of the world’s most high profile, on-trend, and diverse, spread of electronic music,” wraps Thump (3/30/14). “While the (mostly) beautiful weather and unparalleled setting are certainly assets, the creative programming of all three days was impressive. Ultra is designed in such a way that many stages can flip a genre-switch in a way that not only creates a sonic balance but can foster discovery for new music.”

According to the City of Miami Police Department, this year’s Ultra Music Festival was also a resounding success for the city, with the lowest total of arrests made since 2012. “Ultra came through and did what they said they were going to do,” said City of Miami Commissioner Frank Carollo. “As a world-class city, we should be able to hold world-class events.”

For up-to-date information on anything related to Ultra Music Festival, please visit ultramusicfestival.com