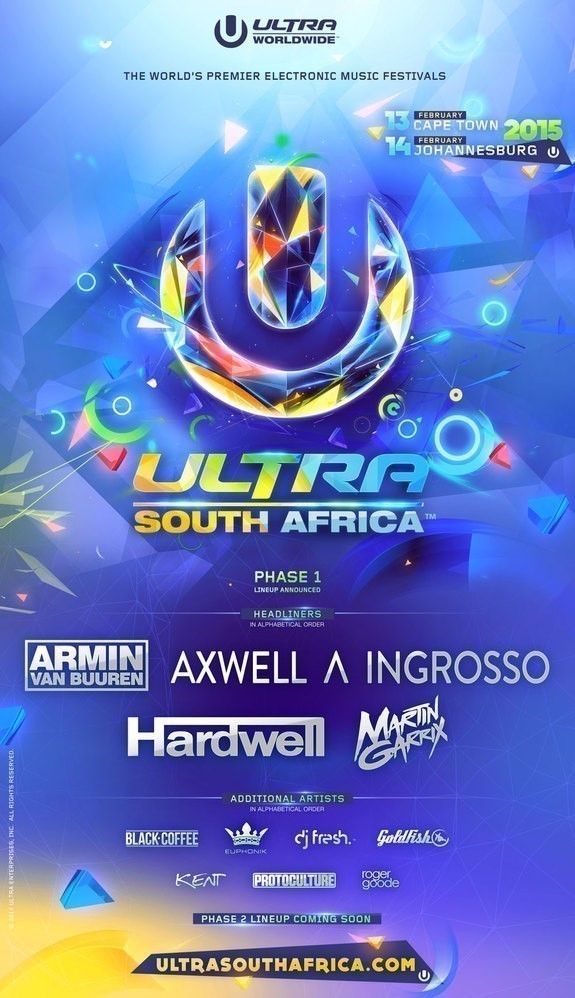 Having hosted the largest electronic music festival in African history in 2014, Ultra South Africa is returning for its 2015 edition with even grander plans; kicking off with the announcement of a storming Phase One lineup!

With over 40,000 attendees passing through the hallowed Ultra gates across the two-day event earlier this year, Ultra South Africa returns to the striking landscapes of Ostrich Farm in Cape Town and the Nasrec Expo Grounds in Johannesburg on Friday 13th and Saturday 14th February 2015 respectively, with every intention of making history again!

Headlining the First Phase are some of dance music’s most sought-after acts, with current DJ Mag #1 Hardwell set to make his first appearance at the festival alongside fellow debutants Armin van Buuren and Axwell^Ingrosso. Furthermore, firm favourite Martin Garrix will be returning to the grounds where he so memorably whipped the locals into a frenzy during his sets at the previous edition. The eclectic and diverse sounds of the festival that were so strongly established in its first outing will also remain prominent, with the headliners big-room sound finely balanced with the inclusion of some of South Africa’s biggest and best talent. This includes the Cape Town-based funk duo Goldfish, underground tech-house star Black Coffee, as well as, an appearance from the legendary house outfit Fresh & Euphonik. Other acts to round out the truly spectacular Phase One include hometown mix specialist Roger Goode, budding house superstar DJ Kent and renowned producer Protoculture.

Pre-registered fans will have the chance to exclusively purchase their tickets at 9am SAST on Thursday, 6th November before they go on sale to the general public the following day‹Friday, 7th November. With Early Bird admission already sold out due to unprecedented demand, advance entry tickets will begin on sale at R850 for both events, with VIP versions being sold at R1,250 and R1,500 for the Cape Town and Johannesburg events respectively.

“As Ultra expands to all corners of the globe, continuing to bring the festival to new frontiers, there truly may not be a more beautiful location than South Africa. The memories that everyone came away with after the inaugural edition were timeless. The fans there are truly passionate, and they encompassed what loving the music and indeed our experience is all about. We are raising the bar in February, bringing Ultra back to South Africa in a big way. We’re looking forward to growing the event there for many years to come, and making Ultra South Africa a destination festival that every music fan should experience at least once in their lifetime.”

“First year shows usually tend to be replete with growing pains, but with South Africa it just instantly worked. It certainly helped that we had a massive lineup and the energy really transcended to the crowd. Ultra South Africa turned out to be a very special show for our team, the Artists and most importantly the fans lucky enough to be there to witness history in the making.  Continuing with our trend of coming stronger every year, our second edition in South Africa surely won’t disappoint as evidenced by this tremendous first phase lineup announcement.”

“To say that Ultra has changed my life is an understatement. It is an absolute honour to part of such an incredible global family. In year 1 of Ultra South Africa we set the tone, now in year 2 we have learned a whole bunch of new tricks and can’t wait to show the South African public an experience they will never forget!”

To register go to www.ultrasouthafrica.com