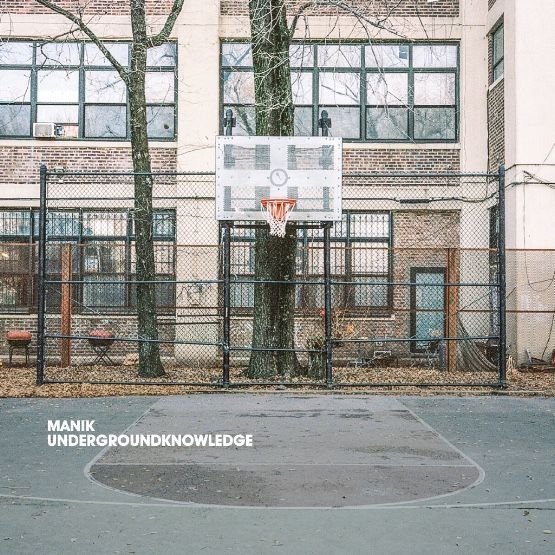 “Undergroundknowledge is a  journey into Queens on the 7 train. It flips through my history (my youth and the sights, smells, and sounds around me) and is a window on how I grew up. Musicality wise, I wanted to explore my background of house music, but also dig deeper on the jazzy and hip-hop influences.” – MANIK

MANIK fired on to electronic music scene in 2011 with releases on Ovum, Poker Flat and Culprit. The Queen’s native is the quintessential New York DJ; a connoisseur of dance music with an inimitable style that crosses multiple genres. A seasoned crate digger, MANIK spends hours in record shops to find those forgotten records and hidden gems. Since his electronic beginning, he has also released on labels including B-Pitch Control, Kim Ann Foxman's Firehouse, Huxley's label NIO, Fresh Meat Chicago and he is known for cheeky edits of Janet Jackson and the Beastie Boys.
Undergroundknowledge follows MANIK’s debut album release ‘Armies of the Night’, released on Ovum in 2011.

“I moved out to the West Coast three years ago and started writing this album. And somewhere in this time, I found myself as an artist. I took everything back to where I started, super underground, low key, New York, Chicago, Detroit sounds. There are non dance orientated parts, but it is relevant to me a an artist and me as a person. Who I am, where I come from and what I am today. Stepping away from the city allowed me to fully find where I was trying to go in life. Both as an artist and human being. When I moved, I stripped it back to the essentials and it helped me see my work flow way more clearly…

I called the album ‘Undergroundknowledge’. We are in this age of the ultra celebrity DJ thing, I find that not to be my ethos. This is my way of saying I think we all need to take a step back and make the extra effort, spend the extra hour digging those promos – learn about our dance music history – look for the underground knowledge.” – MANIK

A track by track breakdown:

1. 7 train intro: This Intro takes us into Queens, the part of the city where I'm born and raised. I wanted to take the listener into the Queensboro Plaza train stop- this stop connects Manhattan with Queens and vice versa. The sample in the track says "this is a Flushing Main Street bound 7 local train, the next stop is 33rd street." In other words we start the album in Queens – my history. The only feature on this track is "LA-4A" saying at the end of the Interlude "You're listening to MANIK…"

2. Live Jam: This track I wanted to make because I thought it was important to ask simple questions like "why are we so fascinated with the rich?" And "isn't that why we watch the Kardashian's?" etc

3. That Hustle: just a deep house track that I feel represents the city and our hustle… My hustle.

4. Bodega Dreams: The title of this track represents trying to make it. About starting from the bottom and clawing your way to the top. Nobody ever handed you nothing. I grew up in Bodega Dreams.

5. Metropolitan Ave: One of the busiest avenues in Queens, I grew up not far from here. It is a staple of my youth.

6. APT 3D1: I grew up in APT.3D1 off Union Turnpike and Queens Blvd in Kew Gardens, Queens. This Interlude takes the listener back to 1997-1998 area, in my old apartment, when I was 11 or 12 years old. I am flipping the channels on the TV in the interlude. These are some of the things I would be watching in that time. Interlude samples "The Shining" which is my favorite horror movie. It also features "Coming to America" which is my favorite comedy by Eddie Murphy. I was also a huge NBA fan, Michael Jordan fan and Allen Iverson fan. So another part in the Interlude samples the one iconic moment where Allen Iverson does a crossover to Michael Jordan and it was this almost symbolic changing of the guard from the old-school to the new school player. Lastly, this Interlude does have a theme. It starts with (and continues to flip back to) this one news channel story interviewing Jeffrey Gamblero a.k.a. KORN- who is at one point -one of the most wanted graffiti artists in New York City. Mayor Rudolph Giuliani created an entire campaign to go after him in this era. KORN is the founder of the legendary smart graffiti crew "SMART." He sadly passed away a few years ago but his work lives on. He was a friend.

7. Devils Dance: This is just an acid house tune I made with real hardware. I am a student of the game and an Acid house freak. Always have been and always will be.

8. Restart: Continues my love of Acid.

10. PS.99 Interlude: In this Interlude, I wanted to take people back to what it was like when I was in elementary school. I attended PS.99- which stands for public school 99. New York City breaks down the public elementary schools as such- number wise. I showcase what it was like in the school yard. People playing handball that you can hear… You can still hear the outside train tracks close by. The interlude is introduced by Queens hip hop artist "Meyhem Lauren." Meyhem Lauren has a show on VICE with Action Bronson called "fuck that's delicious." Meyhem also went to Ps 99 with me. He shouts out our old Physical Ed. teacher Mr. Redd. Meyhem was also part of the legendary SMART crew referenced above in Track 6, hence the graffiti samples in the background of this Interlude. This track also features some artist friends of mine calling in to leave me Voice Mails. Eli from Soul Clap, Doc Martin, Option 4, Till von Sein all call in.

11. People of Rhythm: This track reminds me of NY point blank. Just a simple Deep tune with a lot going on simultaneously. People of Rhythm describes what a New Yorker is. Always on their own groove but somehow in sync.

13. Lefrak City: Another neighborhood I grew up near- off of Queens boulevard- near my Junior high school.

14. 5 Pointz Feat. Greg Paulus: Greg Paulus of No Regular Play was gracious enough to lend his amazing trumpet abilities on my record. This track is dedicated to the now defunct legendary graffiti building in Long Island city which is known as 5 Pointz- it was iconic and seminal to the New York street art scene for so many years. Wanted to honor 5 pointz by having another New Yorker collaborate with me on a track. Greg closes the track out by playing his trumpet on the subway platform.

15. Love N' Rain Outro: The closing track puts us back in the same train station we began the Album in- Queensboro Plaza- only this time we are on the other side of the platform going back into Manhattan, out of queens, out of my past and experiences. The sample at 2:20 says "the next Manhattan bound 7 local train will arrive in approx 6 mins" signals the record has come to a close as we are on our way back to Manhattan.