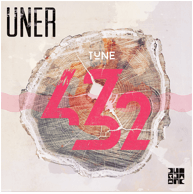 UNER is proud to announce the arrival of his latest album, Tune432. It comes on the Diynamic label that he has been an important part of in the last four years and proves him to be one of the day’s finest house producers.

2013 has been another great year for the man having been a regular in Ibiza at parties like Insane at Pacha, Diynamic Neon Nights at Sankeys and Carl Cox’s night at Space. So too did he release the excellent Phamovi EP on Cocoon inJuly, adding the label to his already impressive discography alongside the likes of Cadenza, and he also picked up an award as best DJ newcomer in 2013, won Artist of The Year and Best Producer at the Vicious Magazine Awards in Spain and undertook an extensive tour of the best clubs in America from Chicago to New York, San Fran to Miami.

It has taken one year for TUNE432 to take shape, working while travelling and producing day and night.  Says the man himself of the album…

“It’s been a very intense and exciting process. It’s taken a full year for Tune432 to take shape, working while travelling, producing day and night. It’s been hard but also extremely pleasant to collaborate with artists I truly respect in my most important release to date. As a professional musician I love to surround myself with people who can contribute with special things to the creative process, people like Piek, Kafele Bandele, Negra and Lazarus, among others.They’ve contributed to their own music, amazing voices, lyrics. I think I’ve managed to come up with something very special. The result is completely what I had in mind when I started it.”

The end result is spectacular. A 13-track album where acoustic instruments and analogue sounds abound, with UNER making the most of his classical training to offer us a more emotional side to his sound away from his usual club offerings: all instruments were tuned to 432 Hz to offer a deep yet sweet tone that laces the whole album.

It kicks off with ‘Let Me Introduce Him’, which gets us started with plenty of organic elements that then lead to the different piano layers in ‘Surfering’. UNER finds inspiration in his Basque land to then compose ‘Laderas del Sollube’, which makes us vibrate with the distorted bass, and makes the most of outstanding performances from collaborating artists Peik, LazarusMan, Kafele Bandele and Negra.

TUNE432 is a harmonious journey filled with emotion and creativity, where organic and analogue sounds, a love of melody and harmony and UNER’s own particular sound are expressed on a higher plane than we’ve been accustomed to in his EPs, thus surprising us with an album that is undoubtedly his most important release to date.