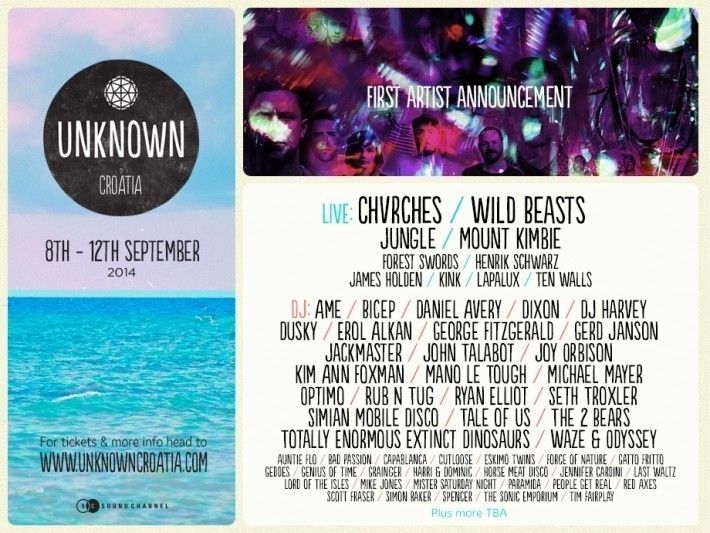 Following a sold out debut event last year, Unknown return with their first announcement and an even bigger programme of the leading talents of the music world with over fifty artists announced today all set to perform between Monday 8th and Friday 12th September 2014. The week-long event will feature live performances from Scottish electro pop band Chvrches, the critically acclaimed Wild Beasts, Jungle, Mount Kimbie, James Holden, Ten Walls and many more. DJ showcases come from Resident Advisor’s No 1 DJ of 2013 Dixon, who is returning back from a memorable performance at Unknown’s debut event alongside the likes of TEED, Tale Of Us, Daniel Avery and Ame.

Further musical recruits include DJ Harvey, John Talabot, Seth Troxler, Bicep, Joy Orbison, Simian Mobile Disco, Michael Mayer plus many more. Artists play across a diverse range of musical activities including daytime and evening events on boats, by the pool, deep in the forest and new for 2014, on nearby islands.

Art and performance were a highlight of Unknown’s first event and will be returning on an even grander scale in 2014 courtesy of Mad Ferret productions, Unit 44 and more. Also new to 2014, the main stage will be open a whole extra day giving more scope for live performances. With 25-30 flights a day leaving the UK for nearby airports, its easier than ever before to attend.

Returning to the beautiful town of Rovinj, crowned the jewel of the North Adriatic, Unknown is set within an inclusive site with accommodation options ranging from camping to five star luxury apartments, all of which are available from unknowncroatia.com from 11th February. Put together by the Leeds promoters Sound Channel, Unknown 2014 still has more surprises in store with further artists yet to be announced.

In the meantime those in attendance last year can relive the memories with the 2013 highlights video and reminisce on many special moments that saw Lulu James make part of her live performance in the sea, an emotive close to TEED’s album tour and an epic afterparty bringing together back to back sets from Disclosure, Joy Orbison, Jackmaster and Optimo. With Unknown 2014 promising even more memorable moments, the festival is the only place in which to celebrate the last days of summer.