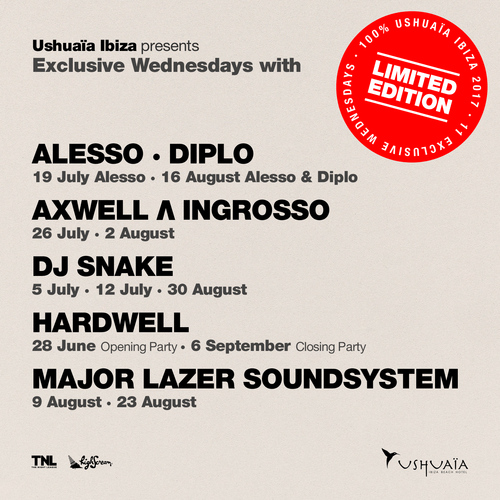 Setting the standard when it comes to exceptional events, Ushuaïa Ibiza Beach Hotelhas revealed an all new concept for Wednesday nights on the white isle. Featuring headline appearances from Ushuaïa regulars as well as a select handful of major international players who have yet to play the iconic venue, Limited Edition will offer revellers a rare to chance to catch these acts in action.

Kicking off 28th June through to 6th September, with a different headliner each week, the club’s Limited Edition nights will see some of the cream of the dance music elite take to the decks for a very special series of totally unique shows. Ensuring they always go the extra mile with their superstar bookings, Ushuaïa has hand-picked a selection of top-tier talent to bring an exclusive touch to their unparalleled poolside parties.

Axwell ^ Ingrosso are on track for another momentous year at Ushuaïa as they prepare to return for the first time, not to do a complete season, but to take part in the launch of Limited Edition – a concept they first discussed with Ushuaïa back in 2016. The pair will be bringing with them a huge show, focusing their energies on two weeks, amongst a season of other producers and artists they greatly respect. Not only an Ushuaïa first, but also a career milestone, DJ Snake is set to play three shows that will mark the viral hitmaker’s first ever shows in Ibiza. Digital dance hall dons Major Lazer Soundsystem will also be making their Ushuaïa debut this year, joining forces with the no 1 open air club to throw some of the biggest bashes the Balaerics has to offer.

Limited Edition will also see world-revered regulars Alesso, Axwell ^ Ingrosso and Hardwell curate their own nights, giving fans a chance to see their favourites in action for a handful of exclusive evenings on the island.

Having already hosted several successful takeovers in previous years, Alesso will return to host two major shows this summer, including a rare reunion behind the decks with Diplo.

Since making their first collaborative appearance back in 2014, Axwell ^ Ingrossohave become one of music’s most high profile pairings. Two of Sweden’s hottest exports, the pair have achieved almighty success through their radio-ready productions and main stage performances at some of the world’s biggest festivals.

Multi-Grammy award-nominated Diplo has carved a name for himself as one of the most sought after and versatile producers of his generation and will be teaming up with Alesso for highly exclusive, one off performance. Bridging the gap between mainstream and underground, Pentz has earned himself an impressive list of accolades and awards throughout his career.

Achieving unprecedented success with Grammy-award nominated worldwide hit ‘Turn Down For What’ back in 2014, not to mention the fantastic festival anthem – and worldwide smash hit – ‘Lean On’ – in collaboration with Major Lazer and MØ, DJ Snakewent on to achieve yet more global production success with the release of his debut album Encore last year.

Producer, musician, label owner and documentary film maker Hardwell was voted #1 DJ in the world twice running and looking back through his unbelievable career, it’s easy to see why. Aside from his huge productions that has seen him collaborate with everyone from Craig David to Austin Mahone to Jason Derulo to Tiesto.

Walshy Fire, Diplo and Jillionaire – aka Major Lazer Soundsystem – are undoubtedly one of the most raucous, innovative and greatest musical acts on the planet. Achieving world-domination with their unique fusion of Caribbean and American music, the multi-platinum trio broke all records with their 2015 single ‘Lean On’, which has become one of the most popular songs of the decade.

Since the legendary venue first opened its doors back in 2011, Ushuaïa Ibiza Beach Hotel has become synonymous with top-tier talent and unrivalled hedonistic raves. Bringing the world’s most in-demand artists to the island year after year, whilst remaining at the forefront of cutting edge stage design and production, it’s no wonder their nights remain some of the most coveted parties in the world.

As the name attests, Ushuaïa will be pulling out all the stops to ensure that no two Wednesday nights are the same so make sure you are one of the fortunate few to be part of the action and get your tickets before they go!