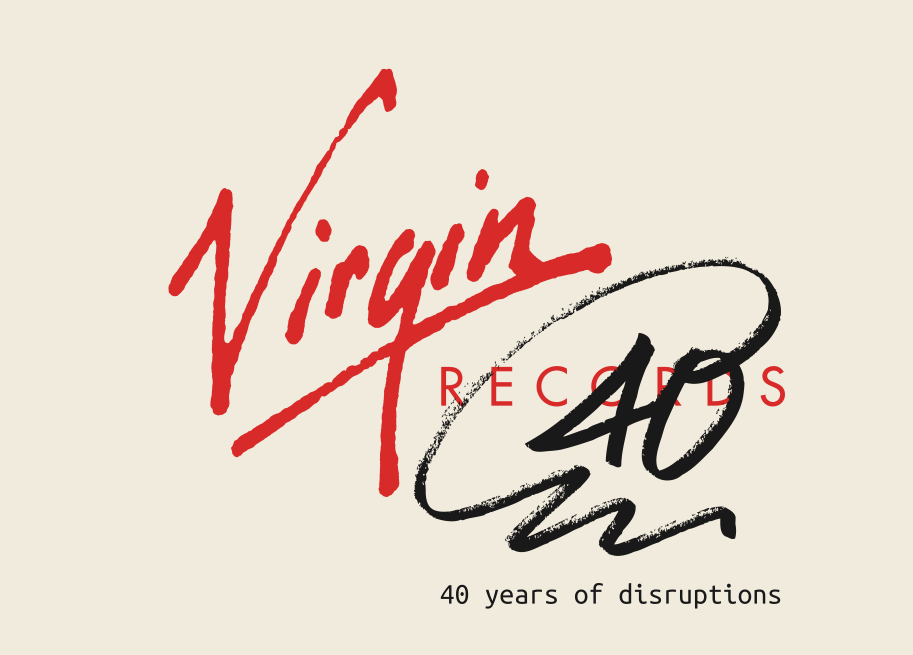 2013 is the 40th anniversary of Virgin Records, the revolutionary British record label launched by Richard Branson in 1973. To mark the event there will be a series of events taking place this autumn celebrating the label’s rich history and ability to “disrupt the status quo”.

Launched 40 years ago with the largely instrumental Tubular Bells (a 48-minute suite conceived by 19-year- old guitar prodigy Mike Oldfield that went on to sell 15 million copies), Virgin Records has staked its reputation on doing the unexpected. Since its early days the label has emphasised and supported the maverick, creative drive of its artists; whilst along the way, it has achieved global success in breaking some of the biggest and most influential acts of the past four decades.

Virgin and its artists have been at the forefront of almost every key musical movement of the past forty years.

It was the underdog label that signed the Sex Pistols when they had been rejected by the rest of the music establishment and forged ahead to enjoy great critical acclaim in the post-punk era with the likes of Simple Minds, PiL, Magazine, Devo and XTC.

By the Eighties it was spearheading a colourful new wave of British pop acts, helping to steer Boy George’s Culture Club and The Human League to the top of the charts. Then through London’s Soul II Soul and Bristol’s Massive Attack it helped to push DJ and sound system culture into the mainstream.

In the Nineties the label set a vibrant new benchmark for pop music with the rise of the Spice Girls, oversaw the birth of new, electronic dance genres with Daft Punk and The Chemical Brothers before changing the post-Britpop landscape with The Verve’s, Urban Hymns.

It’s this desire to think creatively, challenge conceptions and take risks that has established Virgin Records as one of the most innovative record companies of the past four decades. Founder Richard Branson said,

“Virgin Records is where it all started for Virgin and 40 years later it’s great to see we are still being innovative. This exciting series of events is the perfect way to celebrate the 40th anniversary of Virgin Records and the artists, from Mike Oldfield to Emeli Sandé, who continue to disrupt the
status quo.”

Taking place in the autumn and including artists past and present, the events to celebrate Virgin Records ’40 years of disruptions’ will be supporting the charity, War Child. War Child protects children from the brutal effects of war and received the Special Recognition Award at this year’s BRIT Awards.

An exhibition and accompanying art book. The creative direction for the exhibition will be overseen by Adrian Shaughnessy, George Lee and the team
at This Is Real Art. It will include photos (seen and unseen), seminal videos (including props) and memorabilia that capture the symbiotic collaborations between the cultural icons of the day. The location will be an exclusive venue in Mornington Crescent.

The beautiful art book will be edited by leading music journalist Adrian Thrills. Adrian began his career editing the punk fanzine, 48 Thrills’before becoming one of the main feature writers for NME in the Eighties. He contributed fifty cover stories for the paper championing the 2-Tone movement and many of the post-punk, reggae and dance acts of the era; as well as writing the first ever cover story for iconic style magazine, The Face featuring The Specials. The book will be designed by Adrian Shaughnessy, George Lee at This Is Real Art.

A film produced by Leopard Films, one of the UK’s leading production companies, and directed by Paul Tilzey, the director of many award winning documentaries for BBC and Channel 4 including ‘The 70s’. Executive producer Todd Austin and Fiona Morris’ projects include ‘Do it Yourself; The Story of Rough Trade’ (BBC Four) and ‘Imagine: Damon and Jamie’s Excellent Adventure’ (BBC One) respectively.

A series of live events. Virgin Records will be taking over legendary Camden venue KOKO in October.
The shows will celebrate four decades of disruptions involving icons and luminaries from Virgin’s roster past and present.