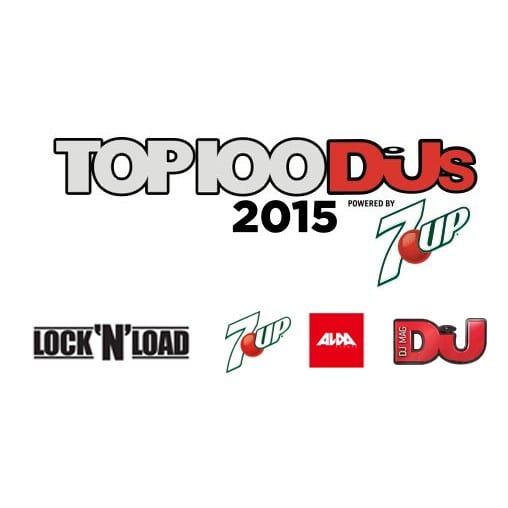 The biggest music poll in the world, the Top 100 DJs Poll 2014 saw over 900,000 votes from over 200 countries, with Dutch star, Hardwell, retaining the No.1 spot for the second year. He performed a headline set at the Top 100 DJs Poll events in Amsterdam and London. Showing the strength and diversity of the global electronic music scene, there were 24 new entries in last year’s Poll, with a total of 30,000 DJs voted for.

For the third consecutive year, the Top 100 DJs Poll Awards powered by 7UP will be held on 16 October at the two-day Amsterdam Music Festival (AMF); returning for the second time to Amsterdam ArenA, the stadium for Ajax football club. The following day, London’s prestigious Brixton Academy will host the UK’s only Top 100 DJs Party featuring headline sets from the world’s biggest DJs, including this year’s newly crowned No.1 DJ. Register at http://www.top100djslondon.com for exclusive access to pre release tickets.

The Poll’s headline sponsor for 2015 is 7UP, who will also be presenting the Next UP Award powered by 7UP, awarded to this year’s highest new entry.

The Top 100 DJs Foundation (registered at the Dutch Chamber of Commerce No.61608947) is the official charity partner of Top 100 DJs. The foundation will be an integral part of Top 100 DJs in 2015, enabling voters to engage in the causes that mean the most to them, and inviting dance music artists, DJs and fans to create a tangible and lasting impact. As part of the voting process, the foundation will ask Top 100 DJs voters the question: ‘What freedom do you feel needs to be accelerated most?’. The results will be revealed during the Top 100 DJs Poll Awards. The multiple-choice answers range from freedom of education through to equal opportunities, equality in relation to gender and sexuality, and freedom of expression.

Top 100 DJs is now a global tour concept, bringing the Top 100 DJs experience to more people than ever before. Large outdoor events in Istanbul, Sofia and Beirut have already taken place this year featuring artists from the poll. More events, in association with Alda Events are planned throughout 2015 and into 2016.

APPLE MUSIC
DJ Mag has been selected as an official curator for the launch of Apple Music, the new music streaming platform from Apple. The magazine joins seven other curators including Rolling Stone and Vice, and is the sole dance music curator on the service. DJ Mag staff will be providing the electronic music playlists and will invite Top 100 DJs voters to follow them on the new platform. DJ Mag can be followed on Apple Music via: http://t.co/730hqwtSKZ

DJ Magazine will reveal a raft of brand activity planned for ADE 2015, with details to be announced soon.

The Top 100 DJs Poll powered by 7UP is a publicly voted poll that inspires fierce debate across the year with speculation on the world’s No.1 DJ, new entries and biggest climbers dominating online discussion and beyond.