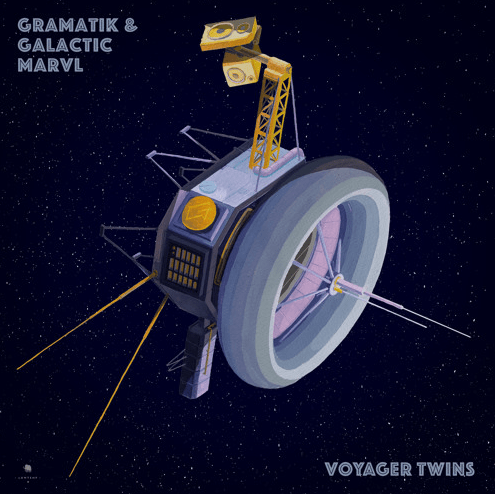 Summer 2017 saw globe-trotting DJ / producer Gramatik venture into a relentless touring schedule that included highlight performances at renowned events like EDC Las Vegas and Lollapalooza in the US, and  Switzerland's Open Air Gambel and Austria's FM4 Frequency Festival abroad. Amidst all of this, the Slovenian artist still somehow managed to find time to hit the studio this year to finish and release four new singles: "Recovery" Feat. Eric Krasno, a collaboration with GRiZ on "As We Proceed," a remix of Flume's "Wall Fuck" with Ramzoid," and most recently, a new original with Galactic Marvl titled "Voyager Twins."

For the latter of these releases, "Voyager Twins" is a glitch-meets-dub inspired track representing an interplanetary sound and visual aesthetic from the two collaborators. Now, the single is being brought to life thanks to an official music video out today. Brought to us by two creative masterminds- Dutch motion and design studio  Supermassive and illustrator  Fernando Leon- "Voyager Twins" transforms the track's epic sound into an astronomical animated voyage centered around the 1977 launch of the Voyager II. It was exactly 40 years ago that NASA sent two spacecrafts on a journey through the outermost regions of our solar system to eventually reach the never-before-seen interstellar space. And it seems appropriate that the twins, Voyager 1 and 2, are being honored by a musician with deep appreciation for scientific research and space exploration.

If unfamiliar with the track before now, "Voyager Twins" is a co-production with the newest mysterious character that hit the DJ circuits, Galactic Marvl. Aside from being connected with the well-known Armada record label, not much is known about this galactic traveller who transcends the boundaries of genre. Whoever Galactic Marvl may be, hee or she looks to be very well versed in crafting tracks perfectly suited for laid-back listening sessions and big festival stages alike.

“Voyager Twins” is out now via Gramatik's label Lowtemp Records, and you can catch Gramatik live on a number of still ongoing international tour dates including the return of his Re:Coil stage design on October 21st at Paris' Zenith.