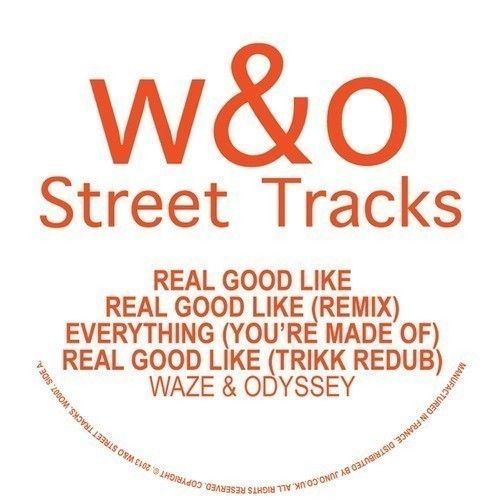 UK House duo, Waze & Odyssey, return in 2014 with a double release ‘Real Good Like’ / ‘Everything (You’re Made Of)’, due to drop on their own imprint W&O Street Tracks for general release on the 24th February, with an exclusive on Beatport from the 12th February.

Since emerging in 2012, Waze & Odyssey have built a reputation as one of the most commanding duos on the electronic music scene. Starting 2014 with another tantalizing offering, ‘Real Good Like’ possess a conquering, bottom-heavy bassline that’s complemented by shimmering synth work and shaking rhythms.  ‘Everything (You’re Made Of)’, is a six-minute, entrancing, brooding club flex: the trademark Waze & Odyssey textured sound.

Gaining club support from the likes of Maya Jane Coles, Citizen, Jimpster, Skream, Duke Dumont and Kim Ann Foxman, Waze & Odyssey have been praised by everyone from BBC Radio 1’s Annie Mac and Pete Tong, to their peers such as Bicep, Steve Bug & Larry Heard, as well as remixing the likes of Disclosure and T.E.E.D.

At home on esteemed labels such as Throne of Blood and Wolf Music before forming their own burgeoning imprint, W&O Street Tracks has also most recently seen the likes of DJ Mag 2013 Winner Citizen release on the label.

With a more than impressive profile that includes a nomination by DJ Mag for ‘Best Breakthrough Act’ in 2012, Waze & Odyssey regularly grace the likes of London’s Fabric, Manchester’s Warehouse Project and Berlin’s Panorama Bar (Berghain). With a raft of huge releases set to drop, 2014 is Waze & Odyssey’s year.

The release comes in vinyl format, consisting of the double A-Side with a re-dub from Trikk and a vinyl only remix.

The digital release will comprise of the two lead tracks only.