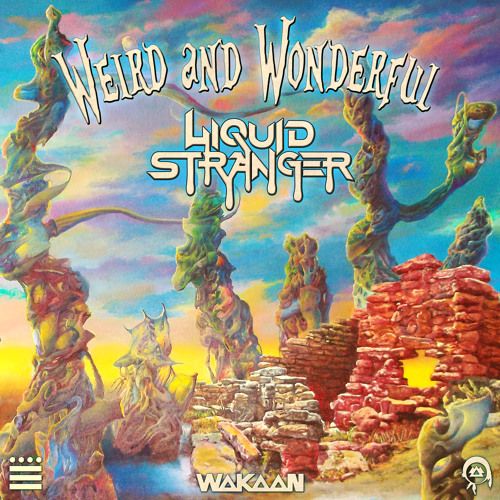 The genre-bending maestro known as Liquid Stranger teased his newest EP with the original release of "Hotbox" late last year, and now he brings us the full "Weird & Wonderful" ensemble. The entire release consists of six diverse, but equally massive tracks, which will satisfy the different appetites of Liquid Stranger's legion of loyal fans. "Launch" is spacey and futuristic electronica, while "Who" comes in banging with a barrage of melody, then it's on to "SPACEBOSS," which is a very suitable name for the track's aggressive and alien-esque outerspace- bass. Meandering seamlessly between genres, "Frankenskank" is funky and reggae-infused, perfect for lighting up and grooving out. After the much acclaimed "Hotbox," the EP rounds out with "Get Well Soon (Aaron)," the most melodic and mellow of the pack; it was written while friend 'Bleep Bloop' was sick on tour, and adds a melancholic and yet refreshingly human element to the entire album.

The fluid, transcendental nature of Liquid Stranger's music enables him to appeal to a wide audience of listeners – in fact, he has held the #1 chart position on numerous occasions and in several different genres, including dubstep, reggae and drum & bass via Beatport. His single "Dissolve" has reached a massive 2.3 million streams on Spotify, along with racking up millions of plays on his Soundcloud page. He has also enthralled crowds around the world this year with appearances at prolific festivals such as Shambhala, Electric Forest, Bumbershoot, Imagine, Nocturnal and Summer Camp. His metamorphic approach to music has grown beyond his own productions into his own imprint, Wakaan, which defines itself as "a forum for eclectic music and art." With Wakaan, Liquid Stranger hopes to curate and support other unique producers and artists. Liquid Stranger draws inspiration from a myriad of directions; in fact, this EP's namesake comes from his fall 2016 tour, "Weird & Wonderful," during which he wrote the entire album from scratch. We never know what this jack-of-all-trades will come up with next, but we can bet it will be completely unexpected and undoubtedly awesome.