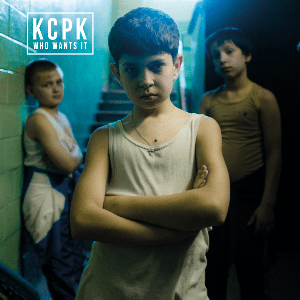 French electronic trio KCPK return with another much needed dose of their blazing production, with their remix EP ‘Who Wants It’ ft. STS set to drop 26th February on [PIAS].

The lead single, ‘Who Wants It’, personifies the group’s familiar tight production style, combining powerful guitars, cold synths, and a dance floor oriented beat. However, for the group it was the input of Philadelphia-bred rap sensation, STS which “transformed [their] initial version of the track.” The lyricist, who has seen support from the likes of FACT, Vice, Rolling Stone and Complex, explained that “as soon as I heard the beat I knew the record was special, it had that energy that makes a rapper wanna rap.”

KCPK have been making their mark on the French electronic circuit over the past few years as incubators of the Rémoise scene, with the likes of Yuksek, Brodinsky and The Shoes. The multi-faceted band have worked with the likes of Woodkid, The Chemical Brothers and Two Door Cinema Club, and are frequent collaborators with PANIK, a night which has hosted the likes of Groove Armada, Laurent Garnier and Amon Tobin.

‘Who Wants It’, which has already been chosen as the backing for Louis De Caunes’ video for Yves Saint Laurent’s unique ‘Black Opium’ digital campaign, opens with a repetitive vocal sample, quickly joined by STS’ fast flowing rhythmic rap. The eclectic track slowly builds in complexity with a punchy kick-drum beat supplying the foundations for echoing claps, synths reminiscent of glitchy French juggernauts Justice or SebastiAn, and distorted guitar riffs. The track comes up for air with a breakdown at the midway point, when STS’ unrelenting powerful yet poetic rap once again takes centre stage. The muffled guitar riff, reminiscent of Fat Boy Slim’s ‘Right Here Right Now’, signals the beginning of the track’s final flourish, when layers of brilliant complexity and repeating vocal samples are eventually extinguished with a powerful thud.

The EP is rounded off with a trifecta of remixes. The first, from POSTAAL (described by Noisey as ‘tasty like a croque monsieur’, and whose track ‘Freedom’ received airtime from BBC Radio 1’s Phil Taggart’) brings a darker spin on the track with ominous synths and a disco-tinged piano riff. When Haute add their trademark stamp by adding vocals from Anna Magidson, the track takes on a completely different musical form, with the new lyrics turning it into a “protest against systematic and irresponsible military deployment”. Darkly, who has had a video premiere on Nowness and received support from the likes of NME and Hillydilly, provides a dark and ominous echoing conclusion to the EP with his downbeat twist, intended to “contrast the intense energy and lyrical content of the original and move it into a different space.”

‘Who Wants It’ is accompanied by stunning cinematic visuals from acclaimed rising director Nicolas Davenel, whose credits include music videos for Birdy Nam Nam and Brodinksy, as well as commercials from household names such as Nike and Nissan. The video, filmed in Russia, conveys the intense energy of the track, with references to youth culture and coming of age in the gangs or Eastern Europe and Russia. Cataloguing the movement of a mysterious package as it transfers through Les Enfants (The Children), Les Ados (The Teenagers), Les Adultes (The Adults) and finally to Parrains (The Godfather), the inspiration for the video came from the classic gangster film genre, such as the work of David Cronenberg in his 2007 feature film, ‘Eastern Promises’.

KCPK’s expertly layered production along with STS’ fire-spitting lyrics, combine to create perhaps the group’s most compelling release yet. Replete with three remixes, which each bring their own distinct character, the trio have created here a cohesive and gripping EP.