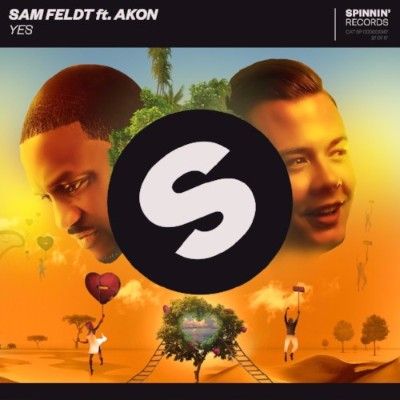 Platinum-selling Dutch DJ and producer Sam Feldt has unveiled his brand new single ‘YES’ featuring the vocals of legendary American hip-hop artist, AKON. The track will also mark the announcement of Sam’s hotly anticipated debut album, Sunrise, which is due for release on 6th October 2017 via Spinnin’ Records.

With typically smooth tropical vibes lacing the production, Sam displays his unique signature style on the track with a slowed tempo, and addictive synth-based melody running throughout the release. Topped with the instantly unmistakable vocals of AKON, the rap star’s rich delivery seals the summery feel to the production, which is sure to act as a firm favourite with Sam’s fanatic ‘Heartfeldters’ fanbase.

The single is accompanied by a colourful music video directed by Deni Kukura. The use of eye-catching body paint and smoothly choreographed dance routines act as a perfect match for the melodic upbeat nature of the track. Featuring Akon himself and Sam Feldt with his live band of trumpet and saxophone players, the music video, much like the release, centres around overwhelming feelings of positivity, and summer-inspired joy.

Dutch beatmaker Sam Feldt is most famed for his Beatport #1 rework of Robin S’ ‘Show Me Love’ which amassed over 200 million combined streams and sold over 1 million singles. His latest single, ‘Fade Away’ (feat. INNA) with Lush & Simon, garnered over 3 million views during the first week alone.

Having become one of the most in-demand names in dance music, the official announcement of his debut album Sunrise marks a huge moment in the young Dutchman’s career so far. Due to be released on 6th October via Spinnin’ Records, the production will serve as Sam’s debut studio album and it will build onto the remarkable success he has received so far.

Best known for his 2005 breakthrough hit ‘Lonely’, AKON has sold multiple platinum albums and singles in a career spanning over a decade, working with the likes of Eminem, David Guetta and Snoop Dogg in the process.

Currently in the midst of a hectic summer schedule which includes performances at Tomorrowland, Creamfields, and various Ibiza dates, including Pacha, and Ushuaia, Sam recently announced the return of his ‘Heartfeldt Pool Party by Sam Feldt’ event at Amsterdam Dance Event. The party will take place at Sloterparkbad Amsterdam on 18th October 2017.

The eagerly-awaited event will see the ‘Fade Away’ hitmaker serve up another fun-filled evening of his phenomenal pool party series, which has so far taken the dance music calendar by storm, with sell-out shows at Miami Music Week (MMW) back in March, and previous ADE events in 2015 and 2016.

With the likes of Lost Frequencies, Kungs, Lucas & Steve, (and a very special guest appearance fromArmin van Buuren) joining Sam at his last ADE pool party in 2016, this year’s edition of the ‘Heartfeldt Pool Party by Sam Feldt’ looks set to be the most impressive so far, with another huge lineup set to join the Dutch producer.