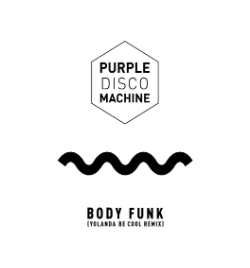 Draping their rework in a driving blend of four-to-the-the-floor house, the pair have stamped the track with their well known summery vibe, creating a hands-in-the-air hit in the process. Cementing their reputation as one of Australia’s biggest electronic acts, Yolanda Be Cool are best known for chart topping single ‘We Speak No Americano’. They have sold over 5 million records and received over 250 million streams worldwide.

Released earlier this year, ‘Body Funk’ has garnered over 12 million streams and has been supported by the likes of The Black Madonna, Jamie Jones and Fatboy Slim. The track spent two weeks at #1 on the BBC Radio 1 Dance Chart and continues to get multiple plays across the R1 family including Danny Howard, Pete Tong, MistaJam and Annie Mac – who crowned the track her ‘Hottest Record In The World’.

The single has solidified Purple Disco Machine’s status as one of the most successful electronic producers on the scene at the minute. The German DJ’s debut album ‘Soulmatic’, released back in 2017, racked up a combined 45 million streams, with the crossover hit single ‘Devil In Me’ amassing over 30 million streams alone. He has also been named Beatport’s #2 artist of all time.

With the release of Body Funk, a second album in the the works, and a performance at Radio 1’s Big Weekend in May, 2019 marks a very exciting chapter in the German producer’s flourishing career.