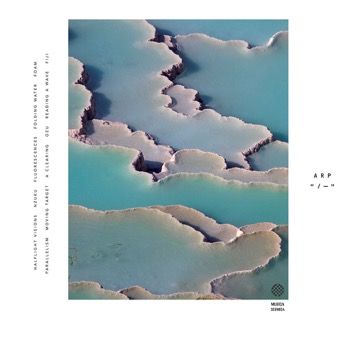 Following several years of quiet for Arp, in which Georgopoulos released a collaborative album with Jefre Cantu-Ledesma, started a regular show on NTS Radio, and retreated to the studio to write and record, 'Zebra' is a defining work that references ambient music, spiritual jazz, minimalism, pop, kosmische, and much more. It will be released on June 22nd. Georgopoulos’ prior albums on Smalltown Supersound were widely praised for their innovative approach to electronic music and integration of pop songwriting. He has also collaborated with British experimentalist Anthony Moore, filmmaker Paul Clipson, Neneh Cherry, choreographer Jonah Bokaer, and more.

Noisey recently premiered “Fluorescences,” which references 80s Japanese production and krautrock in equal measure. Georgopolis told Noisey;
"We’d learned some alternate tunings that Joni Mitchell had used on 'The Hissing of Summer Lawns' and 'Hejira' and something just… clicked. Some strange, unknown doorway just opened. I just felt a new possibility and a clear direction. I went home and sketched out almost the entire album in the next 48 hours. It just all came flooding out.”

A mutant offspring of diverse stylings, unlikely convergences, unfixed constellations, 'Zebra', Alexis Georgopoulos’ – aka Arp – fifth full-length album, is a post-everything symbiosis of ancient to future psychotropics, emphasizing points of connectivity between far-flung traditions. 'Zebra' is as naturalistic as it is alien, disrupting outdated boundaries between musical traditions, hierarchies and genre politics.

Emphasizing 'points of connectivity' in a time when reactive and fractious isolationism threaten in divisive ways, 'Zebra' is the sound of interaction. 'Zebra' seeks something beyond definition of singularity perspective and division. It is constructive instead of flippant: ecstatic instead of wallowing; clear-eyed instead of opiated, romantic instead of cynical.