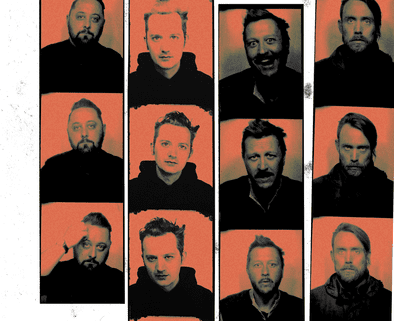 by ihouseuadmin
0 comments
On September 27th, Sheffield-based experimental stalwarts 65daysofstatic release their anticipated, expansive new album replicr, 2019 via Superball Music. This immersive album highlights a continuation from previous releases and a constant evolution which has been evident since their formation.
For a decade, 65daysofstatic could generally be found on the peripheries of any scene trying to claim them, headed in the opposite direction. From their immediately recognisable aesthetic of glitches and urgent guitars of 2004 debut ‘The Fall of Math’, the band’s sound evolved via techno, post-rock, drum’n’bass, math rock, IDM, drone, breakcore, film scores and their self-proclaimed “dustpunk”, clattering into the colossal, widescreen noise sculptures of 2013’s ‘Wild Light’.
In 2016, they released their critically-acclaimed score for ‘No Man’s Sky’, the most anticipated game in the world at that time. Their generative, infinitely long, in-game score was experienced uniquely by each of the game’s millions of players.
This crash course in algorithmic music led to the band building their own procedural musical systems and generative soundscapes, crafting custom synths, live coding and writing software to make music for (and against) them. This new way of working they called “Decomposition Theory” — decomposing from the infinite possibilities their systems churned out instead of composing from the ground up, a dialectic between the band and their machines.
From the eventual smouldering wreckage of their broken software systems and entropic algorithms, the band realised their next record needed to be the opposite. An album born from the debris, but stripped down to its most focussed, intentional form.
replicr, 2019 is the album carved from the wreckage. Forty two minutes of dread. A record that stares head on into the abyssal futures of late capitalism and refuses to blink. A melancholic, tireless soundtrack of acceleration. A feeling of frayed-nerved, time-smudged, light-speed drifting through cities built upon cities. Neon seen through rain-riddled windowpanes. replicr, 2019 is a stark, angular, stripped back slab of focussed noise. It wastes no time because there is no time left to waste.
Opener pretext immediately lays out 65’s intent, a collage of apprehension assembled from a palimpsest of worn out tape hiss, the downsampled entropy of rusted hulks in a forgotten harbour, the pulse of a perpetual machine in decline.
Out of this unease explodes stillstellung’s furious heartbeat. Presumably this places us somewhere between Walter Benjamin’s ‘The Work of Art in the Age of Mechanical Reproduction’, emphasised by the music’s repetition, and his ‘On the Concept of
History’ in which the stillstellung describes a frozen moment, a slice of time in which all understanding of what has gone before can manifest. A kind of historical materialist music then, a title that speaks to the politics weaved throughout this record, never explicit but made clear through its relentless re-cataloguing of multiple musical histories, its interrogations of failed futures.
Despite its title, bad age reveals the utopian impulse that drives 65 to push through their bleak strategies in the hope of getting somewhere better, as obscure time signatures, micro-tuned synths and bastardized guitars become immediately accessible, even hummable. A reminder that 65daysofstatic never knowingly wear their obscurity with pride but rather strive for music that is inclusive, human, inviting and yet always pushing towards the new.
If bad age is the search for better futures then sister is locked in the grim now, with dusk coming on. Having “2019” in the album title is a deliberate choice by the band. As drummer Rob Jones explains: “This was supposed to be the future, but that future got cancelled. History is moving but it’s got nowhere to go. It’s piling up all around us. That’s what this record is about. This atemporality is an illusion, it’s the cultural logic of late capitalism, consuming everything faster and faster, each artefact a more diluted replica of the last. Even the idea that ‘pop will eat itself’ is eating itself. We need to find a way out.”
The year in the title pins the record down, a marker in history, a lighthouse in an exponential typhoon of blind progress.
Album closer trackerplatz begins with a plaintive 16bit sine wave, a blunt distress signal cutting through the fog. A swarm of distortion rises but gone is the bombast of previous 65 outings. As the song’s spare, angular form lifts into noise and its last careful message gets lost in the storm of static, it never quite tips over into oblivion. It suggests that maybe 65daysofstatic haven’t reached the end yet.
Maybe there’s a future to be found after all.
Tracklist:
1. pretext
2. stillstellung
3. d|| tl | | |
4. bad age
5. 05|| | 1|
6. sister
7. gr[]v—_s
8. popular beats
9. five waves
10. interference_1
11. []lid
12. z03
13. u| || | th | r| d
14. trackerplatz
Follow:
Website
Facebook
Spotify
Youtube
Twitter
Instagram