Throughout the cinematic video, award-winner director Loïc Andrieu introduces us to a new female hero high concept; Jane, played by Fleur Geffrier (Elle, The Chalet) – an enigmatic L.A.P.D rookie, is trapped into a scary police hazing ritual and forced to face her power to dive into death. Whilst American actor Carl Crudup (ER, Agent Carter) features as her father figure field training officer.

The script is based on Loïc Andrieu’s feature movie project currently developed by Soldats Films. Talking about his concept, Loïc Andrieu explains, “Call of the wild is a female Orpheus myth. Death is the ultimate Pandora box. Dealing with it calls us to face inherent fears over the ‘unknown’. Jane breaks these boundaries and unveils the mysteries of the antechamber of death. Not dead yet, but no longer alive”.

Exclusively shot by night in Los Angeles and influenced by Sci-Fi thriller archetypes, director Loïc Andrieu worked with British D.O.P Simon Chaudoir – recognized for his work on Liam Gallagher’s recent music video for ‘Shockwave’ and Bjork’s ‘Pagan Poetry’,  as well as commercials including DIESEL ‘Go with the Flaw’, which went on to win the Silver Lion prize at Cannes 2018 – to frame the supernatural thriller music video.

Loïc Andrieu has worked as Steadicam operator on close to 200 feature films, including Luc Besson’s ‘Angel-A’, Leos Carax’s ‘Holy Motors’ and Jacques Audiard’s ‘Dheepan’ among others, before launching his directing career with a music video for Parisian photographer and musician Keffer’s ‘Rouge’ – a dark, visual feast of immaculate cinematography and art direction, which went on to be featured as a Vimeo ‘Staff Pick’.

Following this incredible success, the talented director teamed up with French electronic outfit KCPK on the Nowness-premiered music video for the epic ‘The End’. Loïc’s second promo, carries many of the same tones and themes as ‘Rouge’, with both films being recognised at music video awards and short film festivals, including Best Art Direction at the Berlin Music Video Awards 2015 for ‘Rouge’ and Best direction at Berlin Commercial 2018for ‘The End’.

The stunning visuals Loïc Andrieu created for Agoria’s ‘Call of the Wild’ bring us on the other side. And if he hasn’t been snapped up to direct a Hollywood movie yet, he soon will be. 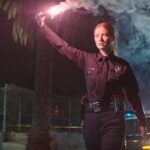